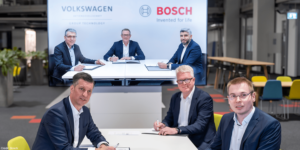 The Volkswagen Group and Bosch want to examine the establishment of a European supplier to equip battery cell factories. This does not involve joint production of battery cells, but rather the development and construction of production facilities with which battery cells are manufactured.

Both companies plan to supply integrated battery production systems and to support battery cell and system manufacturers in ramp-up and on-site maintenance, according to almost word-for-word communications from the two companies. Bosch and Volkswagen say they are striving for cost and technology leadership in the industrialisation of battery technology and the series production of sustainable, modern batteries.

Both partners have corresponding experience in battery production. Volkswagen is known to be operating its pilot production facility in Salzgitter and is planning six battery factories in Europe. In the summer, supplier Bosch announced that it would be able to offer its customers complete factory equipment for battery production – from individual components and software solutions to complete assembly lines. However, this involves the assembly of modules and packs.

It is precisely these competences that are now to be combined in the partnership: VW builds vehicles and sees itself on the way to “becoming a major battery cell manufacturer”. Bosch, on the other hand, has “excellent know-how in factory automation and system integration” – to make the steps from the cell to the vehicle more efficient.

As a first step, the two companies have set up a “project house” to explore industrialisation solutions for battery production in Europe. Within this framework, the establishment of a company is to be prepared by the end of 2022.

“Europe has the unique chance to become a global battery powerhouse in the years to come. There is a strong and growing demand for all aspects of battery production, including the equipment of new gigafactories,” says Thomas Schmall, Member of the Board of Management of the Volkswagen Group responsible for Technology and Chairman of the Board of Management of Volkswagen Group Components. “Volkswagen and Bosch will explore opportunities to develop and shape this novel, multibillion-euro industry in Europe. Our decision to actively engage in the vertical integration of the battery-making value chain will tap considerable new profit pools. Setting out to establish a fully localized European supply chain for e-mobility made in Europe certainly marks a rare opportunity in business history.”

Rolf Najork, Member of the Board of Management of Robert Bosch GmbH and Chairman of the Board of Management of Bosch Rexroth, adds: “Together with Volkswagen, we seek a path to industrialize production processes for battery cells with standardized equipment. We have the best prerequisites for this: Bosch is not only the world’s biggest automotive supplier, but also one of the leading suppliers of factory equipment. We understand how battery technology works, and know how to manufacture it.”

The signing of the memorandum of understanding took place virtually. In addition to Najork, Günter Krenz, Executive Vice President Bosch Manufacturing Solutions, and Aemen Bouafif, advisor to the Bosch Board of Management, took part in the signing on behalf of Bosch. Next to VW board member Schmall sat Frank Blome, overall head of battery Volkswagen Group and Sebastian Wolf, head of operations battery cell Volkswagen Group. For the former European head of Farasis Energy, it was one of the first appearances for his new employer.