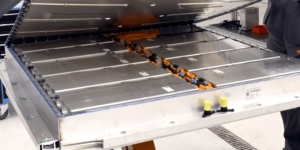 Volkswagen has founded a European Company (Société Européenne) to bundle activities along the battery value chain. In the future, third parties will also be able to participate in the SE as investors. In addition, VW confirms a number of personnel appointments in battery development.

The supervisory board had also approved the establishment of the new SE at its meeting last week, at which above all the planning round 70 was decided. At that time, it was only briefly stated that the “battery-related activities” of the group are to be bundled in it and the perspective participation of third parties was also briefly mentioned.

In the notice on the establishment of the SE, Volkswagen does not give the exact name of the new company, but it does give further details on the planned activities. For example, the tasks of the new company are to include activities “from raw materials processing to the development of the Volkswagen unit cell and the management of the European gigafactories”. The company’s remit will also include new business models for the re-use of spent vehicle batteries and the recycling of raw materials. With the SE, the company is creating “efficient and future-proof structures for the rapidly growing battery business”, according to VW.

Volkswagen is known to be planning the construction of six gigafactories in Europe to meet the group’s growing demand for cells. In 2025, cell production is to start in Salzgitter: the gigafactory in Lower Saxony will produce unit cells for the Volkswagen Group’s volume segment.

There are now new details about the size of the factory: In the first expansion stage, the factory is to produce 20 gigawatt hours of annual capacity, according to the group’s latest announcement; a doubling to 40 GWh is planned. Previously, there was talk of 16 GWh, which was to be expanded to 24 GWh “in subsequent years”.

“We want to offer our customers powerful, inexpensive and sustainable vehicle batteries, which means we need to be active at all stages of the battery value chain that are critical for success,” says Thomas Schmall, Group Board Member for Technology at Volkswagen AG and CEO of Volkswagen Group Components. “We are now bundling our power in Salzgitter, with the aim of encouraging innovation and securing the support of the best partners for our new company going forward. We already have a strong battery team in Salzgitter made up of 500 employees from 24 countries – and we are continuing to strengthen this team at leadership level.”

VW states that “primarily” employees from the Salzgitter engine plant will be deployed in cell production (more than 2,500 jobs are planned in the future), but the company also announces further recruitment: “Where necessary, this know-how transfer will be supplemented by new competencies, for example by recruiting staff externally.” The employees of the engine plant are to be prepared for the new tasks with training courses.

With Salzgitter as the headquarters of the battery SE and the factory, the battery centre for the VW Group is to be created there. Development and controlling will be located there. As is known, the Swedish company Northvolt is responsible for the first factory, which is to produce the unit cells for the premium segment. The locations of battery factories 3 and 4 are to be decided in the first half of 2022; so far Spain and Eastern Europe are being discussed. Possible locations for factories 5 and 6, which are to be built by 2030, have not yet been named.

SVOLT raises €833 million in financing round