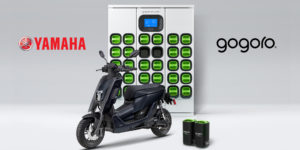 Yamaha is expanding its portfolio of Gogoro-powered vehicles with the new EMF electric scooter. The Yamaha EMF joins the existing EC-05 that launched in 2019. Utilising Gogoro’s battery swapping platform, the EMF will launch on the market in Taiwan in March.

This is not the first cooperation for the two companies, which had released the sister model back in 2019. The electric scooters were designed utilizing Gogoro’s Development Kit (GDK), altho the actual design of the Yamaha EMF was created by Yamaha Motor’s local Taiwanese subsidiary. The subsidiary will also be producing and marketing the vehicle.

While the complete technical specifications have not been released, it has been revealed that the scooter runs on a 7.6 kW mid-mounted motor. Acceleration from 0-50 km/h (31 mph) is supposedly doable in a time of 3.5 seconds, however, the top speed is yet to be announced.

Yamaha has, however, released a fairly futuristic video that also appears to suggest the scooter has something to do with the lights coming on in a city. Whether this is a comment on the vehicles relatively low energy usage in comparison to an electric car is not clear. In Japan, the issue of energy usage has prompted automakers to delay electrifying their cars for some time.

Gogoro battery swapping stations look like they will outnumber petrol stations in Taiwan before the year is out. The Powered by Gogoro Network (PBGN) is open to customers with motorbikes and electric moped scooters from Yamaha Motor, Aeon Motor and Motive Power Industry and also includes India’s Hero Motorcorp and China’s Yadea and DCJ. A couple of months ago, Gogoro and belt-drive specialist Gates revealed a new belt drive system called Flo Drive that will be available for manufacturers in the network.