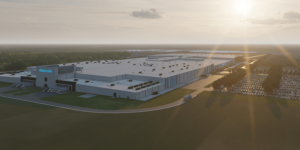 General Motors has announced investments of 6.6 billion US dollars – around 5.8 billion euros – in the expansion of production capacities for electric vehicles and battery cells in Michigan. An existing vehicle plant will be extensively modernised and converted to electric cars, and a third cell production facility will also be built in Michigan.

Four billion dollars will be invested in the conversion of the Orion Township assembly plant alone for the production of the Chevrolet Silverado EV, which was presented at the beginning of January, and the upcoming electric GMC Sierra. Orion Township will become GM’s second production facility for electric pickup trucks, alongside Factory Zero in Detroit, from 2024.

Conversion work at the plant will begin immediately, with new body shops, a paint shop, final vehicle assembly and battery pack assembly being built. Manufacturing of the Chevrolet Bolt EV and Bolt EUV in Orion Township “will continue while the plant is being rebuilt,” GM writes. This suggests that production of these electric cars is likely to end from 2024. Currently, production of the two Bolt variants is virtually at rest, as General Motors needs the existing battery packs for the major recall campaign – the batteries will then be missing from new car production.

The billion-dollar investment in Orion Township is expected to preserve 1,000 jobs and create 4,000 new jobs, GM said. It does not say what Orion’s production capacity will be once the expansion is complete. The memo says only that Factory Zero in Detroit-Hamtramck and Orion can together build 600,000 e-pickups a year at full capacity.

By the end of 2025, GM, along with its other plants in North America, aims to have production capacity for a total of more than one million electric vehicles. The other electric car plants include the factory in Spring Hill, Tennessee (Cadillac Lyriq, among others), Ingersoll in Canada and Ramos Arizpe in Mexico.

In addition to the four billion dollars for the conversion of Orion Township, General Motors is investing another 2.6 billion dollars (2.3 billion euros) in Michigan, together with its partner LG Energy Solution, for the third battery cell plant of the Ultium Cells joint venture in Lansing. Site preparations will begin this summer, with battery cell production scheduled to start by the end of 2024. Lansing, together with the first Ultium Cells plant in Lordstown, will supply pickup production.

Lansing is expected to create 1,700 battery production jobs. In addition to the battery plant, GM is also investing $510 million in two vehicle plants in the Lansing area, Delta Township and Grand River, but they make internal combustion vehicles like the Chevrolet Traverse.

“Today we are taking the next step in our continuous work to establish GM’s EV leadership by making investments in our vertically integrated battery production in the U.S., and our North American EV production capacity,” said GM CEO Mary Barra. “Our plan creates the broadest EV portfolio of any automaker and further solidifies our path toward U.S. EV leadership by mid-decade.”