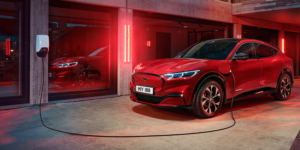 Ford wants to increase its investments in electromobility again in order to convert more plants for the production of electric vehicles. In addition, Ford is reportedly considering spinning off part of its EV business into a separate company.

Last year, Ford announced that it would increase its investment in electric mobility to more than 30 billion US dollars by 2025. The news agency Bloomberg is now quoting unnamed insiders, according to which the company is considering spending an additional ten to 20 billion dollars on the construction of electric vehicles over the next five to ten years. This would add between 8.8 and 17.7 billion euros to the equivalent of over 26 billion euros, bringing the total investment in eMobility projects to 35.5 to 44.3 billion euros.

The plan, called “Ford+”, is supposedly also intended to make Ford more attractive to investors. These should value Ford more like a technology company and not like a carmaker – as is already the case de facto with Tesla. A manager with a past in tech companies is also said to be behind the plans: Ex-Apple and Tesla manager Doug Field joined Ford last year.

The additional investments are to be used, among other things, to convert existing plants worldwide to the production of electric vehicles. Ford currently builds the Mustang Mach-E at its Cuautitlan plant in Mexico and in China with joint venture partner Changan. The F-150 Lightning will be built in Dearborn at the Rouge Electric Vehicle Center next to the existing pickup truck plant. The E-Transit will be assembled in Kansas City.

However, the report does not say which plants will be upgraded to build electric cars with the additional investment. In addition to the plants, the money will also be invested in development and the associated personnel: According to the report, Ford wants to hire engineers in the fields of battery chemistry, artificial intelligence and EV software.

Ford currently ranks fourth in EV sales in the US market behind Tesla, VW and GM. However, by 2024, the company aims to reach 600,000 units and second place behind Tesla, according to earlier statements by CEO Jim Farley.

The Bloomberg report makes another interesting point: Ford is also considering spinning off part of its EV business into a separate company. The new unit would focus on low-volume models. However, the person familiar with the deliberations said the idea was still in the works and the Ford family, which still holds a major stake in the company, still needed to be convinced. The new entity should be placed in the EV start-up environment to take advantage of investor sentiment, he said.