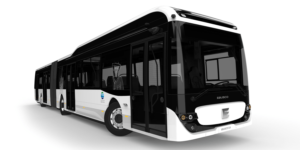 Dutch electric bus manufacturer Ebusco has received a potentially significant order from France. The contract with the Metropole Rouen Normandy includes four Ebusco 2.2 electric buses for delivery around the end of 2022 and an option for 76 more vehicles.

According to the manufacturer, however, the 76 vehicles from the option are not the Ebusco 2.2 model but the newer Ebusco 3.0 model. The Dutch company introduced the Ebusco 3.0 in 2019, but the 2.2 will remain in the program. Should Rouen use this option, the 76 vehicles would be delivered in batches between 2023 and 2026.

Ebusco CEO Peter Bijvelds calls the new contract an “important step in our international expansion.” “Not only are we significantly strengthening our position in the French market, but it is also the biggest order for our revolutionary 3.0 buses to date,” he said. “The extended delivery schedule, over four years, also supports the visibility and efficient planning in the production capacity.”

For the Rouen metropolitan region, Ebusco was awarded the tender for the combination of the high capacity of the batteries and the total competitive cost.

Ebusco says that while there are many transit buses in France, the penetration of electric buses is still relatively low. This is another reason it has identified France as one of the most important target markets in its expansion strategy.

Ebusco has received confirmation that the option for 76 electric buses for the Métropole Rouen Normandie in France will be converted into a firm order. The order is for the latest Ebusco 3.0 buses, and the Dutch company will deliver the first 28 by the end of 2023. The remaining 48 buses will follow in 2024 and 2025.

The move went down well with Ebusco. “We are pleased with Rouen’s confidence in converting the option into a definitive contract,” said Peter Bijvelds, CEO of Ebusco. “We will continue on our chosen path and introduce our innovations in the region and throughout France, the largest bus market in Europe.”

Between the first contract in February, as reported above, and the drawing of options, Ebusco had announced in the summer that it would also build e-buses in France from 2023. For this purpose, the Dutch company rented space at Renault’s Cléon plant.

US Army to decarbonise non-tactical fleet by 2035