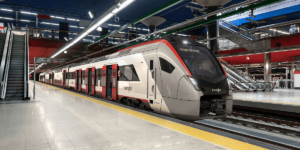 ABB has received orders worth around €70 million from Stadler for traction technologies and battery systems for commuter trains. The orders also include traction equipment for new locomotives sold by Stadler in Spain.

The traction equipment converts the electrical energy from the overhead line or battery into the voltage and frequency required by the traction motors. Since the traction equipment is mounted on the roof, passenger capacity is said to increase. According to ABB, this was an important factor in the tender: The new trains are intended to strengthen Spain’s mass transit network, which carries more than a million commuters a day in some of the country’s largest cities, such as Madrid or Barcelona.

Ford launches deliveries of the E-Transit in the USA