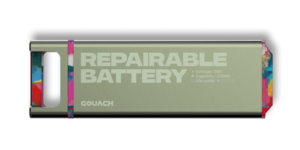 Gouach, in fact, claims they can repair a pack in less than ten minutes. What is more, in their battery, it is not just individual round cells that can be removed and replaced – for example, if a cell is defective or in poor condition. The entire battery, including the control unit, sensors and charging connection, has no soldered joints or cables. This means that the individual components can be easily disconnected and reconnected. The time-consuming separation of solder joints is no longer necessary.

The three founders, Alexandre Vallette, Maxime Agor and Maël Primet, in 2018, got the idea from a study according to which a large part of the components in defective and thus discarded batteries was still in perfect condition. So Gouach set out to reduce the amount of electronic waste and bring down the CO2 footprint of batteries in micromobility by up to 70 per cent.

After an 18-month development phase and the receipt of essential certificates, the team carried out a test phase with the French micromobility provider Pony.

Since then, contact has been made with other clients such as Dott as well and with the funds now raised, Gouach plans to market their battery to more fleet operators and manufacturers in the micromobility sector. “It’s a big challenge, but we are convinced that we can do it,” says Alexandre Vallette, CEO of Gouach.

The funding round was led by Breega. “Gouach is the first European company to tackle the problem of battery obsolescence in the micro-mobility sector in-depth,” says Maximilien Bacot, managing partner of the VC fund based in Paris. “Its patented, smart and repairable battery is a must-have for micro-mobility manufacturers and suppliers, allowing them to reduce both costs and carbon footprint.”

However, the idea of repairable batteries has also met with criticism. CONEBI, the European Bicycle Industry Association, expressed concerns in a position paper published in early February. “CONEBI is a strong supporter of only using original OEM certified batteries on e-bikes, we highly discourage end-users from making use of any repair services,” it says. However, this refers to consumers tampering with batteries, not manufacturers aiming to reduce (planned) obsolescence.

Gouach further clarified that the above view stems “from a safety point of view, and it should not be viewed that our products nor our concept have been criticised by CONEBI. Our direction is in line with the EU CEAP. As we supply to manufacturers (we are not a third party repair service) and do not allow repair to be done by end consumers, like all batteries, there is no conflict with CONEBI’s stance and our product.”

In addition, standardised batteries make sense for shared scooters or rental e-bike operators, and so far, the Gouach battery indeed appears to come in one standard design. The images also reveal the specifications: capacity 378 Watt-hours at 36 Volt. There is, however, a contact tab for fleets seeking custom designs.