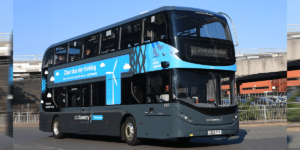 The manufacturing partners BYD and Alexander Dennis Limited (ADL) will build 130  electric double-decker buses for National Express and Zenobē. The vehicles are scheduled to enter service in the English town of Coventry in early 2023.

ADL-BYD will produce the electric buses of type Enviro400EV in the UK. The agreement also provides for spare parts for 16 years. The buses will help make Coventry “the UK’s first all-electric bus city,” according to a statement.

National Express had already announced an order for 130 electric double-deckers a few weeks ago but did not disclose the manufacturer at the time. Meanwhile, the operator said the vehicles would be built in Great Britain.

As a partner in the electric bus project, Zenobē, a British provider of electric vehicle fleets and battery storage, will provide the financing and management of a complete solution that, in addition to the electric buses, also includes the charging and network infrastructure, a second-life battery system in the depot and software to optimise charging processes, among other things.

The new project builds on an earlier collaboration between ADL-BYD, Zenobē and National Express in 2020 for 29 BYD ADL Enviro400EVs in Coventry and Birmingham. Coventry aims to replace all its 300 diesel vehicles with battery-electric ones by 2025. The project is partly funded by the partnership between Zenobē and National Express, with part of the investment also coming from a £50 million grant from the Department for Transport awarded to the West Midlands Combined Authority for Coventry’s all-electric bus city programme, allowing the public sector to do even more.

“As the UK’s leading provider of electric buses, we are delighted to be part of this ETaaS deal with partners Zenobē and National Express,” said Paul Davies, ADL’s president and chief executive. “This innovative model brings together government funding and business innovation to deliver an affordable way of rolling out zero-emission bus fleets at scale.”

A few days ago, Zenobē created a £241 million debt structure to accelerate the expansion of its electric vehicle fleet sector. The company plans to initially service and finance up to 430 new electric buses in the UK and Ireland.

Zenobē’s new financing platform is advised and structured by NatWest and supported by several other financial institutions. The structure of the platform consists of long-term financings. These include the UK private placement institutions Aviva and Scottish Widows. At the same time, short-term facilities are provided by six banks: Lloyds, MUFG, NatWest, Santander, Siemens and Société Generale. These short-term investments will fund capital investments to support electric buses and charging infrastructure, which will be provided under service contracts to bus operators.

Coventry is progressing to become a 100-per-cent electric bus town since the first 50 of 130 all-electric double-decker buses ordered earlier this year have gone into service. The remaining 80 vehicles from BYD-ADL will follow in early 2023.

National Express Coventry already ran ten electric buses before the arrival of the new batch. In total, the public transport company wants to operate around 300 electric buses in Coventry by 2025, supported by £150 million to create the UK’s first all-electric bus city, as mentioned above.

Transport for West Midlands (TfWM) has been working with Coventry City Council on the scheme. It has secured £50 million Department for Transport funding to develop charging infrastructure and to top up the investment being made by bus operators in upgrading their fleets with electric vehicles. National Express has also invested over £60m.

With reporting by Domenico Sciurti, Germany, and Nora Manthey, UK.