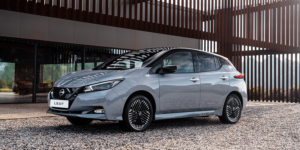 Nissan has given its first mass-produced electric vehicle a facelift. The new Leaf 2022 is being released to herald in the new model year. The new Leaf comes with new colours and rims, among other new elements.

Customers can now choose from two additional paint finishes in addition to six single-colour paint finishes and five two-tone options: Universal Blue and Magnetic Blue. Also new are 16- and 17-inch alloy wheels with a smooth black finish. In addition, the new brand logo adorns the wheels and front grille. Nissan explains that the styling updates have been completed in line with the carmaker’s new brand identity. This Japanese carmaker says that the 2022 Leaf is a foretaste of the product campaign that will see Nissan fully electrify its model range from the summer.

The Nissan Leaf is available with two battery options and a range of up to 385 kilometres. The vehicle is also equipped with the ProPILOT system, which automatically accelerates, brakes and maintains a safe distance from the vehicle in front. The e-pedal also allows the vehicle to accelerate, decelerate and stop with just one pedal.

“The Nissan Leaf has always been about making advanced technologies and the excitement of electric driving accessible to everyone,” said Arnaud Charpentier, Region Vice President, Product Strategy and Pricing for the Nissan AMIEO region. “Leaf has been designed around families’ needs to offer seamless connectivity and an efficient powertrain,” said Charpentier.

Nissan is accelerating its electrification plans with an investment of two trillion yen (approximately 15.6 billion euros) over the next five years as part of the ‘Ambition 2030’ strategic plan that the company unveiled in November 2021. The Japanese carmaker plans 23 new electrified models by 2030, including 15 pure electric models. This will be strengthened by the Renault-Nissan-Mitsubishi alliance that just last month unveiled a joint electromobility roadmap until 2030.

The majority of Nissan’s announced electric models are to be launched already by the end of 2026. In the next five years, the company will launch 20 of the 23 models with a pure battery-electric or electric power hybrid drive. With these model series, an electrification mix of 50 per cent is to be achieved by the 2030 business year. With ‘Ambition 2030’, the Japanese company has concretised the strategy that it presented in January 2021.

Only a few days ago, the manufacturer announced that it would invest 500 million US dollars in its Canton assembly plant in the US state of Mississippi. Two electric models for Nissan and Infiniti – including their battery packs – are to be manufactured in Mississippi from 2025. Nissan is also planning a battery cell factory in the USA.