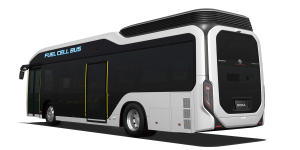 The Japanese manufacturers Toyota, Hino and Isuzu want to drive forward the electrification of buses as part of their joint venture concluded last year. The partners have announced the production of a battery-electric low-floor bus for 2024. A fuel cell offshoot is also to be developed.

The three manufacturers mentioned – with Hino being a Toyota subsidiary – are among the founding members of the Commercial Japan Partnership that Suzuki and Daihatsu have now also joined. The development joint venture is to advance so-called CASE (Connected, Autonomous, Shared, Electric) technologies in the commercial vehicle sector, which includes electric drives.

Isuzu and Hino are expected to use these developments as part of their bus joint venture called J-Bus to launch a BEV low-floor bus in 2024.

The involved companies also agreed to develop a city bus with a fuel cell. Toyota will then also be directly involved in this project as a third partner. Toyota already has experience with hydrogen fuel cell buses: the Japanese company has been selling the Sora fuel cell bus since 2018, and the Portuguese manufacturer CaetanoBus is also using Toyota fuel cells in its buses for Europe.

Although very little data has been revealed about the bus, Toyota has indicated that the same components as in the Sora and the Mirai fuel cell car will probably be used in order to considerably reduce costs. The involved companies want the initiative to help “realize a hydrogen-based society in Japan” by “leveraging Japan’s strengths in fuel cell technology.”

ABB to supply Scania with robots for battery assembly