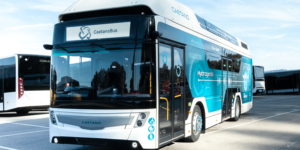 The Portuguese-Japanese cooperation is bearing fruit: Caetano already began building a fuel cell bus type with Toyota technology on board. Now Toyota Motor Europe wants to deepen its involvement in the development of fuel cell buses in Europe.

To this end, TCAP, the joint venture between Toyota Motor Europe and Salvador Caetano, is joining the Portuguese company. “We are happy with this opportunity to expand the historical partnership we have with Toyota to the bus business,” expressed TCAP CEO Jose Ramos. “Together with CaetanoBus, we believe we can strongly contribute to the development of the hydrogen society, by exchanging our know-how and human resources as well as by introducing the well-known Toyota Production System (TPS) to them.” At the same time, TCAP will also become a shareholder in Finlog to develop a bus leasing program.

“These new alliances strengthen our relationship with the Caetano Group and allow us the opportunity to further learn from Caetano’s entrepreneurship and agility,” said Dr. Johan van Zyl, president of Toyota Motor Europe. “Toyota is committed to deliver sustainable mobility and the introduction of Toyota fuel cell buses will further expand our zero-emission line-up in Europe.”

Caetano Bus had unveiled its first FC bus, named H2.City Gold, with Mirai technology on board in October 2019. Combined with five hydrogen tanks that can store a total of 37.5 kilograms of H2, the buses are said to be able to travel up to 400 kilometers. According to the manufacturer, a refueling process at 350 bar should take less than nine minutes.

Toyota says that this alliance will push for further expansion of Toyota’s zero-emission mobility solutions on the way to the hydrogen society. Earlier this month Toyota launched an H2 business unit for Europe focussing on the development of hydrogen ecosystems working closely with industry partners, national and regional governments and organisations.