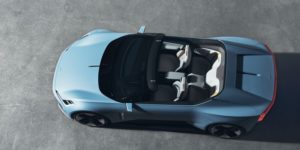 With the project name Polestar O2, the Swedish electric car brand has presented the concept of an electric convertible. The Polestar O2 takes up the design language of the Precept. The brand is not yet making any statements about possible series production.

The O2 is a 2+2-seat hardtop convertible that looks “incredible,” according to Polestar CEO Thomas Ingenlath – who was formerly chief designer at Volvo. “This is a taste of what we can design and engineer with the talent and technology we have in-house,” Ingenlath says. The O2 is the brand’s “hero car” and promises a “great driving experience,” he adds.

Polestar does not give any details on the technical data of the drive in the announcement. As reported in December 2021, the brand is reportedly working on a new electric motor and battery pack with an 800-volt system. Polestar initially claimed that the electric motor would produce up to 475 kW, which would help the O2 achieve good driving performance. Polestar has not made any statements about the battery’s position, specifically, whether it will install the battery in the underbody, as usual, or behind the seats. Since the particularly stiff, as it is bonded, aluminium body is adopted from the Polestar 5, it seems more likely that the battery will be placed in the underbody. There is no statement about the charging performance.

As the aluminium body is particularly stiff, it should provide better responsiveness and a sporty driving experience. “Polestar O2 is our vision of a new era for sports cars. By mixing the joy of open-top driving with the purity of electric mobility, it unlocks a new mix of emotions in a car,” says Max Missoni, Head of Design at Polestar. “But as with all our cars, we are about more than just straight-line sprints. It’s when you turn the steering wheel that the true fun begins.”

Visually, the O2 takes some elements from the Precept concept from 2020, which, as is well known, will result in the Polestar 5 production model. The headlights and taillights are strongly reminiscent of the Precept, as are the short overhangs. At the same time, the aerodynamics, despite the unfavourable open roof, are said to be good thanks to some hidden design features, thus improving the range. Additionally, Polestar lists integrated ducts designed to calm the airflow over the wheels and side panels. The taillights are also shaped to reduce turbulence behind the vehicle.

To increase sustainability, Polestar uses a “thermoplastic mono-material” in the interior of the O2. The term ‘mono-material’ describes the use of a single base material to make various components. In the O2, this is recycled polyester used for all soft interior components: Foam, adhesive, 3D knit fibres, and nonwoven lamination. Polestar sees this as a “significant step towards a circular economy” because, on the one hand, it reduces weight and waste, but it also makes recycling easier.

Despite the focus on sustainability, Polestar doesn’t want to sacrifice all the gimmicks in the concept: The O2 includes a specially-designed video drone integrated behind the vehicle’s rear seats. Developed by Aerofugia in collaboration with consumer electronics brand Hoco Flow, the drone can be used while driving to record driving sequences for customers who like to showcase themselves and their vehicle on social media.

Audi to release software and charging updates for the Q4