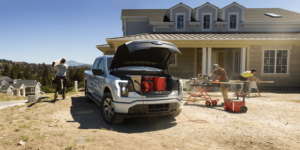 In California, Pacific Gas and Electric (PG&E) and Ford have announced a vehicle-to-grid (V2G) collaboration. In the pilot project, PG&E and Ford will test the F-150 Lightning and its Intelligent Backup Power bidirectional charging capabilities in powering customer’s homes in PG&E’s service area.

The initial tests will explore how Ford’s new F-150 Lightning electric vehicle can interact with the electric grid and can offer more reliability for PG&E customers. This means that during power outages – which are not uncommon in California, especially in the fire season – customers should be able to supply their homes with electricity with their F-150s.

The V2G bidirectional charging capacity installed in Ford’s F-150s called Intelligent Backup Power is making its debut in this vehicle. Ford says that the vehicle should give customers the ability to provide up to 10 days of power to their homes during an outage, depending on home energy usage. The first installations of Ford’s Intelligent Backup Power are are now taking place and are supported by Sunrun as Ford’s preferred installation partner.

PG&E Corporation CEO Patti Poppe says: “Today, we are seeing breakthrough opportunities at the intersection of the energy and transportation industries.” She explained: “As more electric vehicles and new charging technology become available, it is critical that we better understand how EVs can interact with the electric grid and how we can best support our customers.”

We recently reported that PG&E is doing a similar trial in collaboration with General Motors. Other carmakers are also trialling this technology across the globe, with the hope that the extra power required to transition transport off fossil fuels and onto electrical power, can be buffered and managed by using electric car batteries as mobile power units to stabalise the grid, to allow drivers to charge up when the power is most readily available, and to be able to use this energy for other purposes.

Just last month we reported that Siemens Smart Infrastructure has collaborated with Ford on the ‘Ford Charge Station Pro’ made for the Ford F-150 Lightning e-pickup. It is the first bidirectional-ready charging solution for electric vehicles to be released at the end-user level, according to Siemens.

In August last year in the UK, EDF luanched a new commercial charging service in the UK using V2G technology established through its joint venutre Dreev with Nuvvve in 2019. Renault has also been working with V2G technology for some time, rolling out V2G trials across Europe in 2019.

California generates 40% of the state’s greenhouse gas emissions in the transport sector. Now, with this second announced V2G project within a week, PG&E aims to optimise electric vehicle integration with the electrical grid that could provide further value to all PG&E customers. Last year, the utility produced 93% of its energy from sources that do not produce greenhouse gas emissions, making its energy supply is one of the cleanest in the USA. PG&E and Ford plan to explore additional use cases and potential for bidirectional charging technology in support of PG&E customers and the grid.