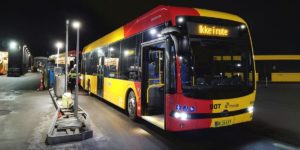 BYD has delivered 21 more electric buses to the Danish bus operator Anchersen. These are 13-metre-long new-generation low-entry electric buses that will be used on several lines of the public transport operator Movia in Copenhagen.

The 13-metre buses with their LFP batteries are said to have a range of up to 300 kilometres. This is apparently not the maximum configuration: in November 2021, the public transport operator Nobina had also ordered 42 examples of this model, but the range was specified as 400 kilometres.

According to Isbrand Ho, General Manager, Commercial Vehicle Business Center at BYD Europe, the new buses are compatible with the charging infrastructure that Anchersen has already installed at its bus depot. This saves time and offers more flexibility, he says.

The 13-metre bus can accommodate up to 70 passengers. A reinforced interior structure and an intelligent warning system are designed to improve safety for drivers and passengers. In addition, BYD states that the vehicle has a so-called “6-in-1 controller”. This controller encompasses the “entire ecosystem of the bus” and is said to increase reliability and operating efficiency – which in turn leads to lower operating costs.

This is BYD’s second order from Anchersen: the Chinese manufacturer have already delivered 28 12-metre electric buses to Anchersen. When the order was placed in 2018, there was still talk of 27 vehicles, so the order was probably subsequently increased. “We have placed great emphasis on environmentally friendly transport for many years, and it is the innovations and support of our suppliers that help us lead the green transformation in Copenhagen,” says Anchersen CEO Poul Anchersen. “The all-electric buses ordered this time are already in daily use and we promise to provide more innovative electric buses for Copenhagen over the next 12 years.”

BYD says that in total, more than 600 of the company’s electric buses are either already on the road or on order in the Scandinavian countries alone. According to the report, the vehicles delivered have covered more than 40 million kilometres, saving more than 44,000 tonnes of CO2 emissions.