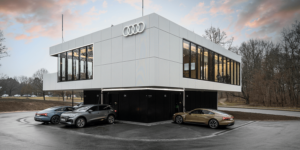 After three months of trial operation of the first Charging Hub opened in Nuremberg in December 2021, Audi has decided to continue and further expand the model project with its own charging stations.

Audi boss Markus Duesmann announced the expansion of the hub project at the manufacturer’s annual press conference. The second location has already been determined: “We have successfully started the pilot phase with the Audi Charging Hub. In the summer, we will test a second pilot in Zurich,” said Duesmann. “Charging must be as easy as refuelling – and ideally even more convenient.”

The first location in Nuremberg has six reservable fast charging points that enable charging outputs of up to 320 kW. To relieve the strain on the grid connection, the Charging Hub has a stationary battery storage system made of second-life batteries – so the system manages with a connected load of 200 kW.

The Audi Charging Hub is based on so-called cubes. The flexible container cubes can be assembled and disassembled on existing surfaces in just a few days. The cubes offer two fast-charging points per unit and can be combined in different constellations. Lounges are located on the first floor above the charging points for people to stay while charging.

Duesmann did not reveal further details on the second location in Zurich. So the exact location and configuration of the cubes with the charging points has not been confirmed. According to the German publication Automobilwoche, Duesmann still indicated at the press conference that the location will have a different layout than Nuremberg. “We will offer four charging points there, this time without an associated lounge. There will be up to 320 kW charging capacity,” the Audi boss said.

Additional locations besides Nuremberg and Zurich are being planned, he said, but there are no details yet. “The project is running very successfully,” Duesmann says. “There are a lot of things in the pipeline.” He also pointed out the positive advantages about the Nuremberg location in terms of demand: “We had over 2000 charging processes. I was there myself once, and all the charging spaces were occupied.”

At its annual press conference, VW subsidiary Porsche had also confirmed investments in its own HPC infrastructure. Porsche wants to build “premium charging stations” with its partners. There are no confirmed locations yet, as is the case at Audi, but there is speculation about 100 Porsche-owned HPC locations in Europe, ten to 15 of them in Germany.