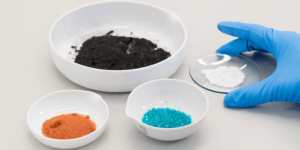 The multi-metal supplier Aurubis has started the test operation of a new pilot plant for battery recycling in Hamburg. A battery recycling plant on an industrial scale is to be built within the next five years.

The pilot plant is reportedly modular in design. In a hydrometallurgical process, metals such as lithium, nickel, cobalt, manganese and graphite are extracted from the so-called ‘black mass’. This is produced as a powdery residue when lithium-ion batteries are dismantled and shredded. The process was developed by the company itself and a patent application has been filed.

The metals obtained in the recycling process can then be reused – for example for new batteries or other products. The exact duration of the pilot plant’s test operation is not stated in the Aurubis press release. The pilot plant will be followed by a feasibility study in the next step.

The company currently expects an investment of about € 200 million for this. “The responsible approach to resources and the goal of closing the cycle of valuable metals for electric vehicles are important factors for our investment decision,” Harings continues. “Furthermore, recycling is a central, strategic driver of growth for Aurubis. We want to play a leading role in battery recycling.”

Aurubis is investing in the battery recycling field as part of its strategy “Metals for progress. Driving Sustainable Growth” strategy. In February, the company announced an investment of € 70 million in the construction of a plant (BOB – Bleed treatment Olen Beerse) at the Belgian Aurubis site in Olen, where electrolyte (so-called bleed) is processed and nickel is extracted from it, among other things.

According to its own information, Aurubis produces more than one million tonnes of copper cathodes and various products made of copper or copper alloys, such as wire-rod, continuous cast shapes, profiles or flat-rolled products. In addition, the company produces other metals such as precious metals, selenium, lead, nickel, tin or zinc. Aurubis employs about 7,200 people and has production sites in Europe and the US as well as a service and sales system in Europe, Asia and North America.