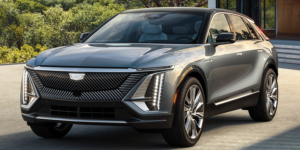 Cadillac has started pre-selling its first electric model in China. The Lyriq SUV will initially go on sale there with rear-wheel drive in the Long Range variant. The model is produced in China by the GM-SAIC joint venture. There is also news about the market launch of the Cadillac Lyriq in the USA.

First to China: there, the Lyriq can be pre-ordered with immediate effect for a deposit of 1,190 yuan (around 165 euros). Deliveries are scheduled to begin in mid-2022. Prices for the first model based on GM’s new Ultium platform start there from 439,700 yuan (the equivalent of a good 61,000 euros).

In China, SAIC-GM will be responsible for the local production of the Cadillac Lyriq. The joint venture has been active in Wuhan since 2015 and already builds three New Energy Vehicles there, more precisely the BEV versions of the Chevrolet Menlo and Buick Velite 6 as well as the PHEV version of the Buick model. However, the Lyriq will not roll off the production line in Wuhan, but in Shanghai. There, SAIC-GM commissioned a plant (Ultium Center) in October to support the construction of the new Ultium vehicles. The Cadillac Lyriq is the first representative of this new BEV generation.

The locally produced version of the mid-sized electric SUV is 5,003 mm long, 1,978 mm wide and 1,635 mm high and has a wheelbase of 3,094 mm. The production model largely adopts the design elements of the show car unveiled at Auto Shanghai 2021 in April. The first Lyriq variant on the Chinese market – the rear-wheel-drive, long-range version n – comes with 255 kW of power and 440 Nm of torque. With a 100 kWh battery on board, it is said to offer a range of over 650 kilometres according to Chinese standards (300 miles, the equivalent of 483 kilometres, are given for the USA). As far as the charging performance of the Chinese version is concerned, we can only refer to the values given at the general presentation of the model. Charge capacities up to 19.2 kW AC and up to 190 kW DC were mentioned at the time.

According to GM, 1,000 pre-orders were received within an hour after the pre-order option opened. Parallel to the pre-sales launch, Cadillac is also opening six ‘Cadillac IQ Spaces’ in five Chinese cities. There, potential customers can get an insight and also place orders. Incidentally, the Lyriq is to be followed in China by Ultium electric cars from Buick and Chevrolet. According to an earlier report, SAIC-GM plans to invest over 50 billion yuan (about 6.4 billion euros) in electrification, among other things, by 2025 and to introduce more than ten Ultium-based electric models manufactured in China.

Meanwhile, the market launch of the Cadillac Lyriq is also imminent in the USA. Production of the electric  SUV will begin in spring 2022 at GM’s Spring Hill assembly plant in the state of Tennessee. According to Cadillac, development of the electric model is currently “at least 80 per cent complete”. Now it’s on to the fine-tuning.

The Lyriq will also be launched in the USA as a ‘Debut Edition’, initially as a rear-wheel-drive model with a large battery pack – starting at 58,795 US dollars net. Cadillac quotes an output of around 250 kW and a battery capacity of 100.4 kWh. However, the reservation pool for the debut edition of the Lyriq in the USA has already been exhausted; pre-orders for other variants are expected to start in summer 2022.

All-wheel-drive variants and also larger and smaller battery packs are possible with the Ultium platform, but Cadillac is not giving any further details on this as yet. For the 2023 model year, the production launch will probably be kept simple with a battery and drive configuration.

The Lyriq is highly significant in that Cadillac has announced its intention to introduce only purely electric new models from now on and to completely stop selling cars with combustion engines from 2030. This would mean that the premium brand would make the switch to zero-emission drives somewhat faster than the entire group. GM had announced at the end of January that it would no longer sell combustion engines from 2035.

Cadillac had already emphasised in the past that it would focus strongly on electric mobility and become GM’s “leading electric brand”. Already announced are another electric SUV below the Lyriq as well as three larger electric SUVs – up to an electric counterpart for the Escalade, whose days are probably numbered with the current announcement. In addition, a “super-exclusive” electric sedan, the Celestiq, is to be launched.

Audi to build the Q8 e-tron in Brussels