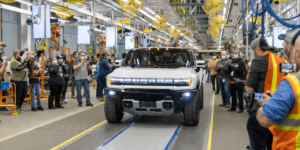 According to Reuters, citing information from suppliers, GM plans to produce 25,000 units of the Cadillac Lyriq electric SUV and 21,000 units of the GMC Hummer EV electric pickup truck in the current year – significantly more than previously planned: According to the original plans, only 3,200 of the Cadillac Lyriq and 3,800 of the GMC Hummer EV were to be built this year. This makes a total of 46,000 instead of the planned 7,000 vehicles – or 557 per cent more.

GM is also expected to resume production of the Bolt EV this year, after production of the electric vehicle was interrupted following a recall due to battery problems. The newly supplied batteries from LG Energy Solutions were needed for the recall, which is why hardly any batteries were available for the production of the new cars – and the assembly lines were stopped.

GM has not confirmed the plans. However, according to Reuters, GM has given instructions to suppliers to prepare for 21,000 GMC Hummer EV vehicles when supplying Factory Zero in Detroit. Similar instructions have been given for the Cadillac Lyriq built in Tennessee.

GM itself referred in a statement to the investments announced by CEO Mary Barra. In January, GM had announced investments of another 6.6 billion US dollars in the expansion of manufacturing capacities for electric vehicles and battery cells in Michigan. By the end of 2025, the company wants to have production capacities for more than one million electric vehicles (including 600,000 electric pickups) in North America alone. Given these production capacities and delivery targets, it therefore seems very obvious to scale production as early as 2022 – if this is already possible in the plants.

General Motors has more than 190,000 reservations for electric vehicles in North America so far. More than 110,000 are for the Chevrolet Silverado EV alone, 59,000 for the Hummer EV pickup truck and its SUV offshoot, and more than 25,000 for GM’s BrightDrop brand of electric delivery trucks.