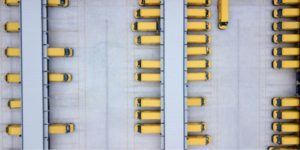 DHL Express will introduce 270 new e-transit vans to its UK fleet this summer. The 270 new Ford E-Transits are due to enter service between May and September, serving over 30 different locations including London, Manchester, Leeds, Birmingham, Bristol, Southampton, Liverpool, Sheffield, Edinburgh and Glasgow.

Last year, DHL UK ordered 50 Mercedes-Benz eSprinters. This brought the number of electric vehicles at DHL UK at the time to 129, including the UK’s first fully-electric 16-tonne truck. Now, the new Ford E-transits will more than triple the size of the electric van fleet.

In the UK, the company has committed to having a 100% electric UK-wide courier fleet by 2030. Globally, Deutsche Post DHL Group aims to convert 60 per cent of its last-mile delivery vehicles to electric powertrains by 2030, putting more than 80,000 electric vehicles on the road.

Ford’s E-Transit was revealed in late 2020, announced as an “electric workhorse”. The electric van has a 67 kWh net battery and is equipped with an electric motor that is unusually powerful for this segment: Ford gives the power at 198 kW and the torque at the equivalent of 430 Nm (original specification: 317 lb.-ft.). By comparison, a Mercedes e-Sprinter has an output of 85 kW, the VW e-Crafter 100 kW. In the E-Transit, the electric motor is also installed on the rear axle.

The E-Transits have a range of 140 miles (225 kilometres) and a payload of approximately 1000kg, which DHL says is similar to the diesel vans they are replacing. The German postal and logistics firm says the vehicle’s bodies have been customised for ease of use for drivers and says that its drivers are being provided with training to ensure they are familiar with the new vans and confident in their capabilities.

DHL says it has also focussed on developing its infrastructure to support its EV roll-out. This includes stand-alone charging points across the Service Centre network, as well as 10 fully integrated EV-ready sites, with an additional three opening this spring, and 13 more planned later this year. To allow for additional electric vehicles in the future, DHL says it has made sure that the charging infrastructure is scalable.