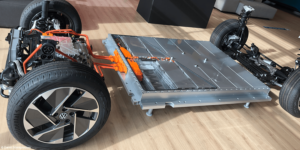 In February, local media reported that the location for VW’s third battery cell factory after Skellefteå with Northvolt and Salzgitter had been decided: the factory was to be built in Sagunt north of Valencia – the industrial estate there is well connected to motorways, a port and a railway line.

“It’s our ambition to electrify Spain and we are willing to invest more than seven billion euro together with external suppliers for the electrification of our Martorell and Pamplona plants and the localization of the battery value chain in Valencia,” says Thomas Schmall, Member of the Board of Management for Technology at Volkswagen AG and Chairman of the Supervisory Board of Volkswagen subsidiary Seat.

The Valencia Gigafactory would be Volkswagen’s second cell factory location after Salzgitter – Skellefteå is to be operated by partner Northvolt. Volkswagen is aiming for a production capacity of 40 gigawatt-hours per year in Sagunt and plans to employ more than 3,000 people in Valencia.

It is not clear from the VW statement which locations were in the running apart from Valencia. What was clear was that the third factory is to be built in southern Europe and, according to earlier announcements on electric car production, Spain was considered the favourite. VW only states that there were more than 100 criteria in the “demanding” selection process – such as skilled labour, public funding, good logistical connections and green energy. Whether the public-private cell factory near Barcelona announced in 2021 will now be built at all with VW and/or Seat participation is unlikely.

The timetable is tight even for Valencia: in order to be able to start series production in 2026, construction of the plant should begin by the end of the year. To this end, VW limits that all plans are still subject to final approvals, “in particular the outcome of the PERTE application”. Applications for the Spanish funding programme will be possible from 1 April.

VW’s fourth cell factory is to be built in Eastern Europe, exact countries or possible locations are not yet known. The locations of the planned factories 5 and 6 have not yet been determined. – However, the plant in Salzgitter, which is to start production in 2025, is to serve as a blueprint.