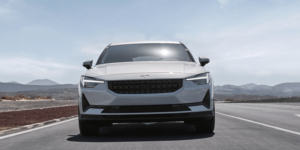 Polestar has announced the market launch of the all-electric Polestar 2 Long range Single motor fastback in the United States. Available to order online, the single-motor Polestar 2 starts at prices of $45,900, or as low as $33,400 after qualified federal and state incentives.

The current Polestar 2 model range includes three variants with a combination of long- and standard range batteries as large as 78 kWh, and dual- and single-motor powertrains with as much as 300 kW and 660 Nm. Additionally, Polestar points out that despite being “the lowest-priced vehicle in the Polestar lineup, this latest model’s EPA estimated 270-mile range is the brand’s longest”.

Polestar also clarified their next vehicle release plans again. In the next three years, Polestar plans to launch one new electric vehicle per year, starting with the SUV Polestar 3 in 2022. The Polestar 3 is also planned to be manufactured in the USA. This will be followed by the Polestar 4, which is expected to follow in 2023 as a smaller electric performance SUV coupe.

In 2024, the Polestar 5 electric performance 4-door GT is planned to be launched as the production evolution of Polestar Precept concept that was presented in 2020 to “showcase the brand’s future vision in terms of design, technology, and sustainability”.