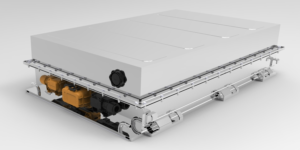 US battery manufacturer Microvast has introduced two new lithium-ion cells and an improved battery pack. The new 48-ah and 53.5-ah NMC cells have been specifically designed to power commercial and special-purpose vehicles.

Both new pouch cells are available in the same dimensions and can be integrated into Microvast’s new fourth-generation battery packs. Microvast manufactures its own cells in China through its subsidiary Microvast Power Systems Co. Ltd. Production is scheduled to start in Clarksville in the US state of Tennessee in the third quarter of 2023. The cells will then be assembled into modules in other plants – for example at the European headquarters in Ludwigsfelde.

Both cells are NMC chemistry, but with different designs. The MpCO-48Ah has an energy density of 205 Wh/kg and can be charged to 80 per cent in 16 minutes. Microvast states that it has a service life of over 7,000 cycles at 25 degrees. This puts the new cell slightly below the MpCO-17.5Ah introduced in October 2020, which has 8,000 cycles. At 186 Wh/kg, however, it has a lower energy density.

The HpCO-53.5Ah, which is also new, has an energy density of 235 Wh/kg. This cell is rated at over 5,000 cycles at 25 degrees, and the charging time is significantly higher at 48 minutes. This cell can only be charged at 1C, while 3C is possible with the MpCO-48Ah.

The cells will be installed in the fourth generation battery pack. This has similar dimensions to its third-generation predecessors, but delivers up to 20 per cent more energy and power. According to Microvast, the new packs have improved safety features at the module and pack level, which should lead to improved thermal management.

The new cells and battery packs are available for sample orders now. Microvast expects to start mass production in 2023.