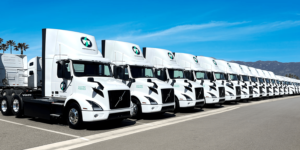 The order was placed by a Maersk Group company, Performance Team. The company says that the Class 8 electric trucks will be used for future transport tasks in California, serving port and warehouse distribution routes. The first new vehicles will enter service in the second quarter of 2022, with all 126 vehicles then expected to be in service by the first quarter of 2023.

According to the manufacturer, the Volvo VNR Electric has a range of up to 440 kilometres and an energy storage of up to 565 kWh. The vehicle can be equipped with different battery packs, with the six-battery pack being able to charge up to 80 per cent in 90 minutes, and the four-battery version up to 60 per cent in the same time. The VNR Electric will be produced at Volvo Trucks’ New River Valley plant in Virginia, the exclusive manufacturer of all Volvo Trucks in North America.

“Volvo Trucks is excited to continue collaborating with Maersk on its fleet sustainability goals and to play a key role in the organization’s continued scaled investments in electromobility solutions,” says Peter Voorhoeve, president of Volvo Trucks North America.

The order previously placed with Volvo Trucks by Performance Team was placed in September 2021. A few months later, in January this year, Volvo Trucks unveiled the next generation of its all-electric heavy-duty truck. Production of the upgraded model is scheduled to begin in the second quarter of 2022. Orders have been open since then.

Volvo Trucks North America already recently received an order from WattEV for 50 VNR Electric. Maersk reportedly announced a few days ago that it would put a total of 300 Einride electric trucks on the roads in the US between 2023 and 2025.