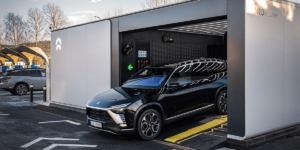 Technology and services group, Technotrans, will be supporting the Chinese electric car manufacturer Nio with its battery exchange stations for Europe. The German company has installed the prototype of a cooling solution in a Nio station in Oslo.

Technotrans‘ cooperation partner is Swap, a Shanghai-based company that is part of the Nio Group that specialises in the production and distribution of vehicle batteries. The exchange station in Oslo is the first for Nio’s planned expansion into Europe.

Technotrans says that the prototype is already successfully in use at the Oslo station. Technotrans explains that it has developed a solution that is precisely tailored to Nio’s needs. “Every battery is different,” explains Andreas Seifert, Business Development Director at technotrans responsible for the Asian market. “Old, new, half-charged or completely empty batteries are accepted and charged in the station. Each battery, therefore, requires individual cooling.”

According to technotrans, the solution has a CE quality seal. It features up to 22 kilowatts of liquid-based cooling from a glycol-water mixture. The company started development about a year ago.

The collaboration with Nio could bring Technotrans more business in the future: According to Seifert, the order has the potential to be the starting signal for long-term close cooperation with Nio. The Chinese manufacturer plans to further develop the European market by 2025 with a total of 1,000 Power Swap Stations. Already by the end of this year, 50 battery swapping stations are to be in place at various locations in Europe.

In September 2021, Nio announced its intention to massively expand its network of battery exchange stations by 31 January. At the time, Nio still had only 99 battery exchange stations, which were mainly concentrated on the motorways – initially even primarily on the corridor between Beijing and Shanghai. By January, 828 such stations were in operation in China. The same month, Nio also opened the above-mentioned battery swap station in Oslo.

Technotrans said that Nio’s first pilot stations will be integrated into an existing network of petrol stations throughout 2022. The German company also revealed that “additional opportunities for cooperation, e.g. in the battery asset and fleet management sector as well as in view of home battery charging solutions, are currently under assessment.” This sounds very much like second-life applications whereby used EV batteries are reused for stationary storage applications before finally being recycled.

Carrefour expands charging to all stores