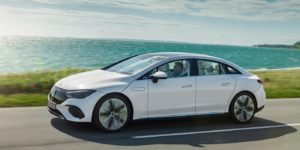 The plug-in hybrids achieved their best first quarter ever with an increase of eight per cent to 45,900 vehicles – although they account for the significantly larger share of xEV sales, growth was much lower for the plug-in hybrids. In the same period last year, Mercedes-Benz sold only around 3,475 fewer PHEVs than in 2022 – in contrast, the manufacturer increased sales of BEVs by around 14,800 units.

Overall, BEVs (incl. Smart) and PHEVs now account for 15 per cent of new car sales worldwide at Mercedes-Benz Cars. In Europe, every third passenger car sold by Mercedes-Benz was electrified.

With an increase of 210 per cent compared to Q1 2021, Mercedes has grown more strongly than rival BMW. However, the Munich-based company, which also just published its sales figures for the first quarter, is ahead in absolute terms: the BMW Group delivered 35,289 BEVs between the beginning of January and the end of March. That is “only” an increase of 149.2 per cent.

A comparison of plug-in hybrids is impossible, as BMW did not list them separately in its report. That leaves a look at the BEV shares: At BMW, 5.9 per cent of all deliveries in the first quarter were purely electric; at Mercedes, it was 4.3 per cent.

In terms of total sales across all drive types, the Stuttgart company sold 501,600 units, a good 90,000 vehicles fewer than BMW. In addition, the decline – due to the semiconductor bottlenecks – was more significant than that of the Munich company at -15 per cent.

Mercedes does not release figures on the individual e-models. Instead, the general statement is that sales were “particularly characterised by the strong demand for the EQA, EQS and EQC models”.

“In a challenging first quarter, we were able to triple our battery more than electric vehicle sales and posted a stellar result with our top-end vehicle segment,” says Britta Seeger, Member of the Board of Management of Mercedes-Benz Group AG responsible for Mercedes-Benz Cars Sales. “Ongoing strong demand for our electrified vehicles in all segments and markets proves that customers desire our EVs and plug-in hybrids. And with the launch of our new EQS SUV on April 19th, we further accelerate our transformation.”

Update 08 April 2022
Mercedes-Benz Vans handed over around 2,700 battery-electric transporters in the first quarter of 2022, 133 per cent more than in the same period of the previous year. The share of zero-emission Sprinter and Vito vans almost tripled in Europe. Deliveries of the EQV increased by 103 per cent in the first three months of the year.

Including internal combustion engines, Mercedes-Benz Vans delivered 89,900 vehicles in the first quarter. The EV share was thus 3.0 per cent. The Sprinter, Vito, Vito Tourer and Citan commercial vans accounted for the majority of the volume, 75,900 units. Just under 14,000 units of the V-Class and its e-derivative EQV were sold, although the vehicle’s third generation is already in its eighth year of production. Mercedes will unveil the T-Class as a Citan offshoot for private customers before the end of April, and the EQT will also be available as an electric high-roof station wagon. Details on the EQT’s powertrain are not yet known, however.

Mercedes-Benz Vans recently reached a significant mark for its electric transporters: the 25,000th all-electric van was produced at the beginning of April. The top seller is the eVito, followed by the eSprinter and EQV.