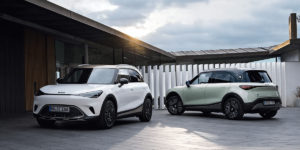 The former Daimler compact car subsidiary Smart has completed its reorientation with the presentation of its newest electric vehicle: Alongside the iconic two-seaters, Smart will build the small electric SUV ‘#1’, for which the technical data is now also available following the premiere in Berlin.

At the IAA Mobility in autumn 2021, Smart showed the ‘Concept #1′. At the time, there was a preview of the design and the first dimensions, but Smart did not provide any further information on technical data. The tone did not change at the premiere in Berlin, with the first word going to the “future CEO”, a child actress who took the stage with confidence to explain what the next generation expects of us. Terms like environmentally friendly were used, but also concepts such as car-sharing were mentioned.

There were, however, some changes between the concept and the premiere version of the electric SUV. At 4.27 metres, the Smart #1 is two centimetres shorter than the concept, but the wheelbase is the same at 2.75 metres. The presentation greatly emphasized their corporate reorientation, both in terms of modern drivers’ needs, as well as accompanying technological development.

The #1 is based on Geely’s SEA platform (Sustainable Experience Architecture) and offers one of the smaller battery configurations of the SEA with 66 kWh. The platform is also designed for vehicles up to the E-segment and commercial vehicles up to 5.5 tonnes, and Smart emphasized the flexibility of the platform, as it is configurable with larger and smaller chassis, as well as batteries. In the competitive environment, the Smart is on par with a Hyundai Kona electric and eight kilowatt-hours above the VW ID.3 Pro of roughly the same length.

For the drive, Smart/Geely relies on an asynchronous motor that produces an impressive 200 kW. As a result, the #1 thus outperforms models such as the ID.3 and Kona by 50 kW. The torque of the motor is 343 Nm.

The Smart can charge AC with up to 22 kW. DC charging option via CCS was also introduced, with the charging socket placed on the driver’s side above the rear wheel. The #1 is supposed to be able to charge with up to 150 kW and go from ten to 80 per cent in less than 30 minutes. Based on those 30 minutes, that corresponds to an average charging power of 92 kW.

Several partnerships have been made in terms of charging, with ABB providing a standard 22 kWh charger for home use and a partnership in Europe with DCS for public charging. A similar series of partnerships was also negotiated with partners in China, where the brand will simultaneously launch the electric SUV. Next up are Thailand and Malaysia, before so-called ‘Wave 2’ markets, such as the USA, will be considered.

The range is 420-440 kilometres according to WLTP – so in real terms, it should be between 250 and 350 kilometres, depending on the driving profile and weather conditions. When Smart tested the prototypes of the #1 in temperatures as low as -40 degrees Celsius in northern China, the range was probably lower. At that time, the driving systems, the tuning of the drive and the battery temperature management system were tested. Customers should be able to set the #1 to automatically preheat the battery via an app or via the control system in the vehicle – for optimal charging and performance efficiency in cold conditions.

While the battery design and the electric drive come from Geely (where production is also located), the body was designed by the Mercedes design team led by Gordon Wagener. Strictly speaking, however, it is only a smart-design “hat” that is placed on the Geely skateboard. Thanks to the flat skateboard with the electric drive technology, the #1 offers decent space for its size. The rear luggage compartment surpasses the ID.3, which is only one centimetre shorter, with 411 litres to the VW’s 385 litres. There is a small catch: the rear seat, which can be moved by up to 13 centimetres, has to be in the forwardmost position, which noticeably restricts legroom. In the rearmost position, passengers have 13 centimetres more space, but the boot volume drops to 273 litres.

The design is largely familiar from the IAA concept, but elements such as the doors opening in opposite directions and the floating centre console have not made it into series production – the centre console does have an open compartment at the bottom, but unlike in the concept, it is supported by a solid element between the front seats. However, the basic design of the centre console and the interior remains the same. As lead designer Kai Sieber described the vehicle: “There is no contradiction between function and style”.

The aerodynamically integrated door handles with icebreaker function and the 12.8-inch touchscreen as the central control element also made it to the final version of the vehicle – plus a 9.2-inch speedometer display. The software, which is Android-based and was developed in-house, runs on a central high-performance computer that is responsible for infotainment, driver assistance systems, electromobility-specific functions and the electric/electronic vehicle architecture (E/E architecture). The main computer and 75 per cent of all ECUs are to be OTA-enabled.

Smart does not yet mention prices or a date when the #1 will be delivered, citing supply line insecurities. Ordering is expected to start in the summer.

Smart has launched the pre-sale of its first electric model in China following the brand’s realignment. The Smart #1 will be offered on the Chinese market at prices starting at 190,000 yuan (around 27,300 euros) after subsidies. The market launch of the electric SUV, which was presented three weeks ago, is scheduled for the end of the third quarter of 2022 – so probably during September.

There is no statement on the European markets in the reports on the China pre-sale.

Smart UK has confirmed the timing and pre-ordering details for the Launch Edition model of the battery-electric SUV Smart #1. Order books for the Smart #1 in the UK will open in December 2022 with an exclusive 100 Launch Edition examples available ahead of the first vehicle deliveries in mid-2023.