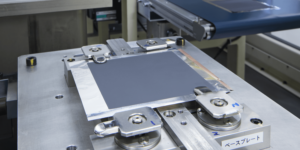 The goal: in 2024, a pilot production line is to be set up at the Nissan plant in Yokohama. The materials, design and manufacturing processes for prototype production are to be examined there.

In doing so, Nissan expects that the cost of all-solid-state batteries can be reduced to $75 per kWh in fiscal 2028 and $65 per kWh thereafter, putting EVs at the same cost level as gasoline-powered vehicles. As part of its long-term vision ‘Nissan Ambition 2030’, which Nissan unveiled in November 2021, the company aims to launch an electric vehicle with solid-state batteries developed in-house by 2028.

“The knowledge gained from our experience supports the development of all-solid-state batteries and we’ve accumulated important elemental technologies,” said Kunio Nakaguro, executive vice president for research and development. “Going forward, our R&D and manufacturing divisions will continue to work together to utilize this prototype production facility and accelerate the practical application of all-solid-state batteries.”

Nissan is part of the Renault-Nissan-Mitsubishi alliance, which unveiled a joint electric mobility roadmap to 2030 in January, with billions of dollars of investment planned for the coming years.

A central pillar of the joint electric strategy is also the alliance’s joint battery strategy – including a focus on developing joint solid-state battery technology, which Nissan is leading. The Japanese had already announced in November 2021 that they intended to sell electric cars with specially developed solid-state batteries in the second half of the decade – the effort has been extended to the Alliance level with the new roadmap.