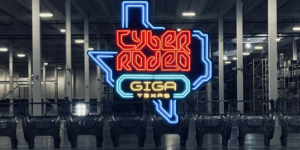 Tesla has officially opened its factory in Austin in the US state of Texas. This is where the Model Y is produced with the new 4680 cells, which are also manufactured on site and integrated into the new structural battery pack. In addition, Elon Musk announced a new model.

Even though only the Model Y with 4680 batteries will be produced in Austin for the time being, the opening ceremony was themed “Cyber Rodeo”. Starting next year, the Tesla Cybertruck will also be built in Giga Texas – and as Musk confirmed at the event, the Tesla Semi electric truck and the new Tesla Roadster.

“California was running out of room,” Musk said during his appearance at the new US factory. “And we needed a place to grow big. And there’s no place like Texas.” The Giga Texas building, he said, is “the most advanced car factory the planet has ever seen.”

For the Model Y, Giga Texas is already the fourth factory worldwide after Fremont, Shanghai and Grünheide. But new in Austin are the facilities for battery production. “We have everything we need under one roof to produce and assemble the first high-volume structural battery pack, using our fully integrated process,” one of the infographics set up around the opening at the factory tour said, according to media reports.

It is not yet known which variant of the Model Y will be produced at Giga Texas with the new batteries. Tesla filed a new Model Y variant with the EPA in mid-March, which is said to have a range of 279 miles – less than the current US variants Long Range (330 miles) or Performance (303 miles). It has not been confirmed whether this is already a base model of the Model Y with 4680 cells – Tesla usually builds the top variants in new plants first.

Publicly, Elon Musk is already thinking further ahead than the question of which variant will be built in the production ramp-up anyway – the plans are ambitious. The Tesla boss announced that Giga Texas would be the highest-volume factory in America. In addition, Musk aims to dominate 20 per cent of the US car market with Tesla in the long term – not only of the electric car market, but overall.

Tesla’s AI team is also expected to play an important role in this. This week, for example, the carmaker announced that all Model Ys produced in China for Europe and the Middle East no longer have radar. Autopilot functions are to be purely camera-based via AI, per “Tesla Vision”.

Musk had already mused about upcoming robot taxi fleets a few years ago in the second version of his master plan. Now, with the progress in artificial intelligence, it is apparently becoming more concrete, even if not really concrete: Elon Musk announced at the opening of the factory that Tesla will build a futuristic-looking electric vehicle as a “dedicated robotaxi” in the future – but he did not give details about the vehicle and the schedule for this.