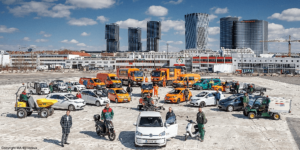 The City of Vienna will no longer procure any new petrol or diesel vehicles for the municipal fleet from 2025 at the latest. Possible exceptions apply to certain special vehicles for which no CO2-free alternatives are available by then.

However, the city also assumes for the special vehicles “that the technology for vehicles with alternative drives will develop so much that sufficiently functioning alternatives will be available on the market”. As Climate Councillor Jürgen Czernohorszky emphasises in the city’s statement, the aim is to ensure the CO2 neutrality of the city’s vehicle fleet before 2040.

A part of the approximately 3,000 vehicles of the City of Vienna is already on the road electrically: there are currently a total of 125 e-cars, 82 of which are passenger cars, the rest are special vehicles or trucks. The first e-waste collection vehicle in Austria has been in use in Vienna for two years, and the second since last summer.

The practical test is accompanied by a team from the Vienna University of Technology. The press release now states that the parameters and criteria examined (e.g. kilometres driven, number of container emptying operations) produced “consistently positive empirical values”. For example, the quality of the battery did not deteriorate in all seasons and at varying temperatures. The capacity of the battery is also very well dimensioned for the daily operation of a refuse collection vehicle. Thus, apart from the price, there were no limitations compared to conventional refuse collection vehicles.

“These and other valuable findings from day-to-day operation will be incorporated into the further strategic orientation of the City of Vienna’s vehicle fleet,” says Czernohorszky.

The conversion to electric drives is also progressing in the bus sector: Wiener Linien recently began construction of an EV competence centre south of the capital. From there, 52 electric buses will be set on the road in the future.