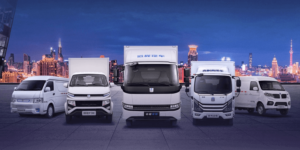 The Chinese battery cell manufacturer and Volkswagen partner Gotion High-Tech has signed a supply agreement with Geely New Energy Commercial Vehicle. Under the agreement, Gotion will supply battery cells for around 126,000 Geely light commercial vehicles such as minivans and light trucks between 2022 and 2024.

It is not clear from the announcement what kind of battery cells are involved in the deal. However, Gotion produces LFP cells, among other things, which are more widespread in China than in this country – and are in particular demand in commercial vehicles due to their lower price. The only thing that is clear is that the delivery volume is to be increased every year over the term of the contract.

Moreover, this is not GCV’s first order from Gotion: a framework agreement was already signed in 2019 – only Gotion High-Tech was not so much in the focus of the Western public before Volkswagen’s entry.