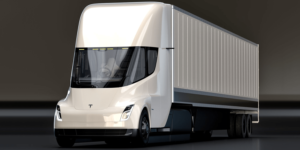 Tesla is considering using an 800-volt architecture for the Cybertruck and the Semi said Tesla manager Andrew Baglino during the investor conference on the latest quarterly figures. He also commented on 800-volt considerations for other models.

On Wednesday evening, Tesla presented its annual report for the first quarter of 2022 – even compared to the previous record quarter (Q4 2021), Tesla was able to increase profit by another billion dollars to 3.32 billion dollars. Sales also reached a new record high.

Interesting in Tesla’s quarterly figures are traditionally the points the company publishes in the investor release and the statements in the subsequent telephone conference. While other companies include measured quotes on business development or future technologies from their board members in the announcement, Tesla acts more freely in the call – sometimes there are rather general statements, but sometimes the managers are particular.

In this case, Drew Baglino, Senior Vice President of Powertrain at Energy Engineering, answered a question about why Tesla is avoiding the introduction of an 800-volt architecture in view of models such as the Porsche Taycan, Audi e-tron GT, Hyundai Ioniq 5 and Kia EV6 as well as the 900-volt Lucid Air model by saying that Tesla is indeed working on an 800-volt system.

Advantages of the 800-volt system compete with overall costs

However, Tesla takes a differentiated view of the development: According to Baglino, the advantages of the 800-volt system (higher charging power at the same amperage or smaller cable cross-sections for the same charging power) would be “massively outweighed” by the overall costs.

“For the smaller platform vehicles like 3 and Y, there’s some wins and losses with 800 volts. Not everything is better,” the powertrain developer said. “And so, we look at that platform, and we’re not like ignoring the reality that you can go to a higher voltage, but there’s nothing really encouraging us to do so on that platform.”

Tesla achieves comparable peak charging performance to Hyundai-Kia’s 800-volt battery-electric cars, even at 400 volts in the models above but can maintain that level for a shorter time. As a result, the charging time is a few minutes longer.

Baglino sees more advantages than disadvantages for vehicles that require higher charging power or more torque. “There’s a little bit more semiconductor and actual conductor savings of going to the higher voltage. And so, we do consider that for Semi and Cybertruck,” the manager says. “But for the 3/Y platform where we’ve got everything running, the benefit is questionably small.”

Elon Musk also commented on the issue after Baglino’s remarks, saying that even if Tesla could save $100 per vehicle by switching from 400 to 800 volts, the decision would come at a “huge cost” elsewhere. The entire Supercharger network, which now has more than 33,000 charging points, would also have to be converted to 800 volts.

In addition, Musk also confirmed during the investor call that Tesla’s dedicated ‘robotaxi’ announced at the opening of Giga Texas, is scheduled to go into production in 2024. This would mean that the vehicle would come one year after the Semi, Cybertruck, and Roadster production has started at Giga Texas. This vehicle is then expected to have no steering wheel or pedals.

Proterra to improve battery capacity on the ZX5 bus