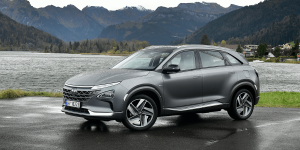 Hyundai recalls its Nexo fuel-cell SUV in the US due to a possible hydrogen leak. The recall stemmed from an incident in South Korea when a 2019 Nexo caught fire at a hydrogen refuelling station.

In the US, the recall so far affects 54 Nexo vehicles built between 10 August and 17 December 2019. It is not yet known whether there are also recalls for the Hyundai Nexo in other countries.

The recall is already the second this year for Hyundai, although last time, it was the battery-electric Ioniq that had to be recalled due to an electronics fault in the drive control system.
carscoops.com