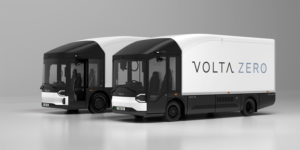 After the Swedish electric truck start-up Volta Trucks presented its 16-tonne version of the Volta Zero in November last year, the company has now presented the second model series in its range of all-electric commercial vehicles. The 7.5- and 12-tonne models will remain closely aligned in appearance to the larger vehicle.

The new vehicle models themselves will feature a visually identical vehicle front, Volta Trucks says. The 12-tonne vehicle, however, is equipped with a longer chassis and a longer body. Because of the higher payload, the vehicle will also have a second rear axle. The design was developed in Warwick, UK, by partner Astheimer Design together with Volta Trucks’ technical teams.

Like the 16-tonne version before it, the new models are characterised by the fact that they were designed from scratch and this circumstance enabled the manufacturer, among other things, to design the cabin in such a way that the vehicle offers more safety to the driver and people in the vicinity. The cabin is largely surrounded by glass. This is said to give the driver a wider field of vision and reduce blind spots. The driver also sits much lower than in conventional trucks, so that he is approximately at eye level with passers-by. In addition, the driver’s seat is positioned in the middle of the vehicle, which allows the driver to get out on both sides. Sliding doors instead of swinging doors are also intended to contribute to greater safety for cyclists.

“Our customers tell us that they really appreciate the safety and zero-emission attributes of the 16-tonne Volta Zero, but also need smaller 7.5- and 12-tonne vehicles in their operations,” explained Essa Al-Saleh, Chief Executive Officer of Volta Trucks. “Our engineering teams are now scaling rapidly to be able to deliver all four vehicles at pace, as our customers ask of us.”

The Volta Zero is designed specifically for inner-city goods transport. The manufacturer states that the range is 150 to 200 kilometres. The final design of the Volta Zero in the 16-tonne version had been presented by the Swedish company at the end of 2021. As Volta Trucks also writes in the current press release, the 16-tonne version is in the final phase of development work and is currently undergoing extensive vehicle tests. The vehicles are to be used by customers before the end of this year. In addition, the production of an 18-tonne version is to follow in mid-2023.

Volta Trucks has set itself the goal of selling more than 27,000 vehicles per year by 2025. In the following years, the sales figures are to increase further. The planned 7.5- and 12-tonne vehicles will contribute significantly to achieving this goal, the company says.

In November 2021, Volta Trucks announced an order for 1,470 vehicles from DB Schenker. This was followed by Petit Forestier’s order for 1,000 Volta Zero vehicles. According to Volta Trucks, it now has a total order backlog of around 6,000 vehicles with an order value of approximately 1.3 billion euros.

The company also announced more information about its’ first truck-as-a-service customer service centre in Paris to service the Volta Zero. The ‘Volta Trucks Hub Paris’ will have office space, a training centre and a call centre, as well as eight repair bays. Customer service and maintenance work will start as soon as the first vehicles are delivered for customer field tests in mid-2022. In addition to the Paris location, another one in London is to be confirmed soon, a statement added.