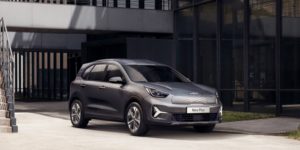 Kia has presented the Niro Plus, an optimised version of the first generation of its Niro EV for taxi services and ride-hailing providers. Compared to the standard model, the length and height of the Niro Plus have been increased by 10 mm and 80 mm, respectively, to provide more space in the interior.

The Niro Plus is based on the first Niro generation, as can be seen in the pictures. As reported, the thoroughly revised second generation is due to go on sale this year, which not only gets a completely new design, but also improvements in detail and a minimally larger battery.

The increase in length is minimal, the additional height of eight centimetres not only makes getting in and out more comfortable for passengers on the back seat, but also increases headroom enormously during the journey. In addition, grab handles have been installed for easier access, and the front passenger seat can also be folded further forward to increase legroom at the right rear.

The cockpit features a new “all-in-one” display. This is intended to house all the displays important to the driver – from navigation to a taximeter app, a digital tachograph and voice recognition. In addition, the driver should also be able to find charging stations in the vicinity via the system.

The Niro Plus will initially be used as a taxi in South Korea and will be offered as a non-taxi-specific model with BEV, PHEV and HEV drive in selected overseas markets later this year. It is not clear from the press release whether Germany will also be among them.

The Niro Plus is the first of the manufacturer’s “Purpose-Built Vehicles” (PBV) announced in March. However, conversions of existing models will only take place at the beginning during the transitional phase: the first PBV model based on a specially developed platform is to be presented in 2025. With this platform – electrically powered – PBVs are to be able to be based “in various shapes and sizes” in order to serve the evolving customer needs in the passenger transport market.