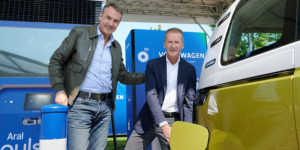 With the inauguration of the first charging station in Düsseldorf, Volkswagen and BP have now officially launched their strategic partnership announced last year. In the first step of this cooperation, up to 4,000 additional fast charging points will be set up at petrol stations over the next 24 months.

In Germany, these will be Aral filling stations, in the UK at BP locations. The second phase is to be completed by the end of 2024, by which time a total of 8,000 new fast-charging points will have been created – but this time not only in Germany and the UK, but also in other European countries.

Volkswagen announced the cooperation with BP last year as part of its ‘Power Day‘ – alongside other charging partnerships with Iberdrola in Spain and Enel in Italy. At that time, the goal of 8,000 charging points with at least 150 kW from the BP cooperation was already mentioned.

The first charging point from this cooperation has now been opened in Düsseldorf – in the very south of the NRW state capital in the district of Itter. This is not a Hypercharger from Alpitronic, which Aral Pulse actually installs at its filling stations (for example, also in Düsseldorf at the Südring filling station), but a VW development. The HPC column, called “Flexpole”, has two charging points (CCS) and an integrated battery storage system.

The latter makes it possible to connect the charging pole directly to an existing low-voltage grid – the peak power during a charging process is buffered from the battery, which then has to be recharged via low-voltage. According to VW, there is no need for a medium-voltage connection including a special transformer or costly construction work.

The integrated storage overcomes one of the biggest obstacles to the rapid expansion of fast-charging infrastructure in Europe – “the need for powerful grid connections”. However, VW leaves it open how scalable the solution is: for an HPC column at a petrol station, the storage solution with low voltage may be cheaper. Whether this also applies to larger locations with several charging stations is not mentioned.

The locations of the charging columns from the cooperation will be integrated both into the navigation systems and charging apps of the VW brands, but they will also become part of the Aral Pulse and BP Pulse network. This will allow all electric car drivers across brands to use the charging points at the familiar rates of the CPO or roaming partners. For the VW brands, the charging tariffs were recently standardised.

For the inauguration of the Flexpole column, the two CEOs Herbert Diess and Bernard Looney came to Düsseldorf. “Investing in everything from software, to batteries and charging is part of our strategy to make individual mobility safer, more convenient and fully climate-neutral,” Diess said. “The decarbonization of Europe’s economy requires close collaboration across borders and sectors. We’re pleased to team up with bp to accelerate the rollout of the fast-charging network across Europe.”

FreeWire gets $125Mn in latest funding round