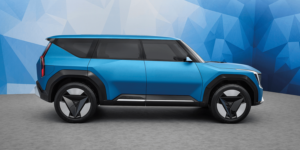 The South Korean car company Hyundai Motor is planning to build a new plant for the production of electric cars in the USA. The company has confirmed the project in principle, but has not yet named a location. But there is apparently already a favourite.

Hyundai Motor confirmed to Reuters that it will “soon announce a new EV plant plan in the United States”, but did not give any details. So far, it is only confirmed that the Genesis Electrified GV70 will be built at Hyundai’s plant in Montgomery, Alabama.

According to Reuters, the carmaker is in advanced talks with officials in the US state of Georgia about building an electric car plant “near existing plants”. Kia’s US factory is located in West Point, Georgia – very close to the border of the states of Alabama and Georgia. However, the insiders did not give any details on production capacity, investments or jobs.

Reuters has already learned which BEV models the South Korean company wants to build in the new plant. These are said to be the E-GMP models Hyundai Ioniq 7 and Kia EV9 for the US market. The official confirmation could take place this month. Two possible dates are mentioned: In Georgia, elections are coming up at the end of May, here the Republican governor Brian Kemp could want to score points with the announcement. The second possibility is the planned visit of US President Joe Biden to South Korea, which is also expected to take place in May.

Hyundai and Kia had presented corresponding concepts of both vehicles – electric SUVs in the five-metre class – last November. Hyundai’s model was still called Seven, while Kia called a spade a spade with the EV9 Concept. At the end of March, Kia presented the EV9 in Europe for the first time and confirmed at that time that the model would also be launched in Europe despite its focus on the US.

For the Ioniq 7, Hyundai had previously stated that the vehicle would be launched in 2024. Kia, on the other hand, wants to deliver the EV9 as early as 2023. Whether these will already be vehicles from the new US plant may be doubted in view of the as yet unknown location and the tight schedule.