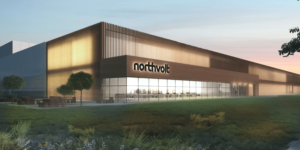 Northvolt is to recieve European funding for its battery factory in Germany. In Berlin, the German Federal Minister of Economic Affairs Robert Habeck officially handed over notification of IPCEI funding (Important Projects of Common European Interest) to Northvolt.

The Swedish company is planning a battery cell factory in the northern German state of Schleswig-Holstein. Northvolt Three will be built in the town of Heide, close to the border of Denmark, and is to go into operation in 2025, employing up to 3,000 people.

Back in January 2021, the second round of funding for Battery IPCEI was approved by the EU Commission. With the approval, the German Federal Ministry of Economic Affairs and Technology is expected to fund a total of eleven projects – initially Tesla was also included as a prominent name in the industry, but the American company later withdrew its application.

Northvolt said at the time that it wanted to “support the development of a competitive European value chain for batteries”. At that time, Northvolt was still officially considering building another battery factory in Germany in addition to the project with Volkswagen in Salzgitter – this was also a decisive condition coming from the Ministry of Economic Affairs.

Start of construction planned for 2023

After this second round, Northvolt withdrew from the VW project in Salzgitter, but plans for its own factory continued until Heide was announced as the location for Northvolt Three in mid-March 2022. The final production capacity there is to be 60 GWh.

“A few years ago, almost all batteries came from Asia. That is now changing rapidly,” said Economics Minister Habeck. “Since 2018, this ministry has been in contact with Northvolt to see if there is interest in building a battery production facility in Germany. We are happy to support this project with a funding decision – in the hope that it will be realised.”

Northvolt now has until the end of the year to access the funding. According to Northvolt CEO Peter Carlsson, this is also firmly planned, with the final location decision to be made in July – so far there is only a letter of intent. “We still have to work on a number of things to make the project a success,” says Carlsson. This concerns training and infrastructure, for example. The entire project is estimated at more than four billion euros, of which Northvolt itself wants to raise about two billion euros – and Germany the approved 155 million euros. The Swedish company still has to collect the rest through investors. “We need to work with all stakeholders to find an efficient capital structure for this project,” Carlsson said.

Habeck pointed out that the decision for Heide was mainly related to the availability of renewable energy. “Northvolt scanned the whole of Europe and chose Heide. Renewables are becoming an enormous locational advantage,” he said. “Where wind and sun become electricity, there are good conditions also for energy-intensive companies. Northvolt’s investment will give further impetus to electromobility in Germany, make us less dependent on imports and create around 3,000 jobs locally.” In addition, Habeck held out the prospect of further support for Northvolt as the project progresses – for example in the financing of training and further education programmes.

Full of praise for the new partner is also the state government in Kiel. “The cooperation with Northvolt has been extremely good,” says the digitally connected Minister President Daniel Günther. “The municipalities in the region were taken along, so that many questions could be clarified directly. We are pleased that Northvolt is creating so many jobs in Schleswig-Holstein.”

On the timetable communicated so far, Carlsson is optimistic. “We have set up a small local headquarters in Hamburg,” says the Northvolt CEO. “Now we are planning to start construction in 2023.” A production start at the end of 2025 would also correspond to the duration of the first project in Sweden. Northvolt produced its first commercial battery cell there at the end of 2021.

Carlsson probably does not have to worry about potential customers for batteries from Heide. He doesn’t name names, but says: “We see enormous interest among our customers in being supplied with sustainable batteries made in Germany.”

Incidentally, the first funding decisions from the second battery IPCEI were handed over by the old German government: they went to Skeleton Technologies, Liofit, SGL Carbon and Alumina Systems in March 2021.