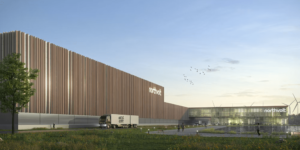 According to the company’s announcement, Northvolt Drei is scheduled to start production in 2025, creating around 3,000 jobs by then. The production capacity with which production is to start and by when the final expansion of 60 GWh is to be reached are not made clear in the announcement. According to Northvolt, the 60 GWh will be enough for around one million electric vehicles.

In addition to battery production, Northvolt is also aiming for a battery recycling plant on site. There, “by-products” from production and also old batteries are to be reprocessed so that the materials can be used in the production of new cells. Northvolt is not yet giving details of the recycling plant. The company aims to cover half of its raw material needs from recycling by 2030.

According to the company, the decision to locate the plant in Heide was made for two reasons. Firstly, the region is home to “Germany’s cleanest energy grid, characterised by a surplus of electricity from onshore and offshore wind power and reinforced by clean energy provided by grid connections to Denmark and Norway”, Northvolt says.

“It matters how we produce a battery cell. If you use coal in your production, you embed a fair amount of CO2 into your battery, but if we use clean energy, we can build a very sustainable product,” says Northvolt CEO Peter Carlsson. “Our philosophy is that new energy-intensive industries, such as battery manufacturing, should be established in actual geographical proximity to where the clean energy is produced.”

Secondly, the region in Schleswig-Holstein is “centrally positioned in the emerging European battery supply chain connecting Scandinavia and continental Europe, the region also provides the space required to establish a battery plant of sufficient size to leverage the economies of scale in production which are key to reducing battery costs.” And, of course, “access to German industrial competence and automotive expertise” should open up additional opportunities.

The Northvolt Drei plant increases Northvolt’s announced production capacity to a total of 170 GWh. Northvolt’s first battery cell factory in Sweden produced the first cell on one of its commercial production lines at the end of December. The company also announced another cell factory in Sweden, not far from Volvo’s Torslanda plant, in partnership with Volvo Cars. At the end of February, it was announced that Northvolt plans to produce cathode material and later battery cells in a closed paper mill in Sweden.

There were already rumours about a plant in Germany last summer. At that time Carlsson confirmed that they were in talks with several federal states. In addition to a possible subsidy, Carlsson also cited the supply of green electricity as one of the most important criteria at the time. Northvolt commented in detail on the power supply in Heide, but did not say anything about investment or subsidies.

The interim head of Northvolt Drei is Christofer Haux, who has worked for Northvolt for almost five years – he has been Vice President Automotive & Foundry since August 2019. “We are looking forward to working with municipalities and authorities in Schleswig-Holstein to ensure that Northvolt Drei is developed in a transparent and collaborative way to make the most of the many opportunities the project offers the region,” says Haux, who has worked and lived in Germany for several years for one of his previous employers.