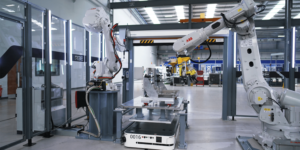 The Israeli company Ree Automotive plans to implement cloud-based robot assembly lines at its integration centre in Coventry, UK. The initial focus will be on the P7 modular platform for commercial vehicles such as trucks and buses, with the first assembly line expected to go live in the second half of 2022.

The integration centre in the UK is about 130,000 square metres and is partly powered by solar energy, according to Ree Automotive. Customers in Europe will be served from there. The company expects to have a production capacity of 10,000 vehicle sets this year, with one vehicle set consisting of four units of the Ree Corner drive module.

In 2023, Ree Automotive plans to transfer highly automated manufacturing from Coventry to its North American Integration Centre in Austin, Texas, doubling production capacity to 20,000 vehicle sets. The site will basically serve as a blueprint for all future REE Integration Centres. Just in January, the startup announced that it had begun testing its new P7 modular platform for electric delivery vehicles and walk-in vans in the US.

“Our cloud-based robotic manufacturing system will be the digital backbone for our assembly lines and give us the local capability to manage our customer-specific manufacturing operations, while also allowing us to quickly share and scale best practices internationally across all plants,” explains Josh Tech, Ree’s chief operating officer.