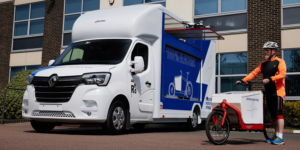 Renault Trucks has unveiled an e-mobility concept for the last mile that involves the use of three modes of transport: E-Tech Master OptiModale combines a battery-electric van with an electric cargo bike and a drone.

According to the company, the solution is the first multimodal e-mobility concept for inner-city delivery traffic. E-Tech OptiModale is designed to transport and deliver packages of different sizes and is suitable for a wide range of logistical tasks as well as medical applications.

“The E-Tech Master OptiModale is a two-person operation, offering the flexibility of delivering larger parcels by van, whilst the second team member takes the eBullitt cargo bike for last mile deliveries where congestion is at its worst,” explained Grahame Neagus, Head of LCV at Renault Trucks UK & Ireland. “Additionally, the drone provides rapid deployment for urgent situations, such as delivering vital drugs or supplies to challenging or inaccessible locations.”

The 3.5 tonne van is a special version of Renault Trucks’ E-Tech Master manufactured by Horton Commercials. It is equipped with an R75 electric motor and either a 33 kWh or a 52 kWh battery. The vehicle serves as a kind of hub from which the drone can be launched and where the battery of the electric cargo bike can also be charged.

The e-cargo bike comes from eBullitt, which can transport packages of up to 100 kilograms. The frame and charging box come from Renault Trucks itself. The bike is equipped with a Shimano electric system for a range of up to 50 kilometres. On board the E-Tech Master OptiModale, the battery can be fully charged in four hours.

The parcel drone comes from Uvatek. It can transport loads weighing up to two kilograms. “Although flying drones is currently restricted in certain areas, their speed and accuracy is ideal for urgent, time-critical deliveries,” says Renault Trucks.