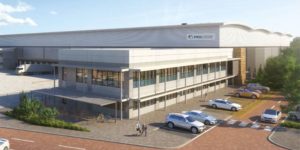 Britishvolt has announced a £200 million investment to build a battery cell research and development centre at its Hams Hall site in the West Midlands with property firm Prologis.

The new facility, worth the equivalent of 235 million euros, is designed to support the smooth start-up of Britishvolt’s battery cell factory at Blyth in the northern English county of Northumberland in 2024 and create more than 150 jobs. Britishvolt also refers to the centre as a “scale-up facility” in the announcement.

The Britishvolt centre is being built in a Prologis technology park. The work is to be completed as early as July. Construction and set-up of the equipment should be completed by the end of the third quarter of 2023, according to Britishvolt.

According to the company, new cell formats and chemistries will be developed in Hams Hall, which will be more powerful but also cheaper at the same time. In doing so, Britishvolt hopes to make affordable electric vehicles possible.

The location, which Britishvolt’s property manager Paul Franklin calls “another important milestone”, comes as no surprise. In January, Britishvolt had entered into a collaboration agreement with the UK Battery Industrialisation Centre (UKBIC) to further develop and manufacture its high nickel electric vehicle sample cells for mass production. The UKBIC’s 18,500 square metre research facility is also located in the West Midlands, more specifically in Coventry.

Hams Hall is also home to a BMW Group plant and Jaguar Land Rover’s Battery Assembly Centre. So the proximity to potential customers is given. The headquarters of cooperation partner Aston Martin Lagonda in Gaydon is also not far away.

Attero invests a billion US dollars in battery recycling plants