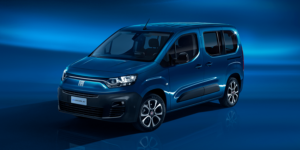 Stellantis subsidiary Fiat has presented the new generation of the Doblo and E-Doblo. The passenger car version will be launched exclusively with a purely electric drive, while the van version will be available as either a combustion engine or an electric model.

The E-Doblo is powered by a combination of a 100-kW electric motor and a 50-kWh battery, a combination familiar from numerous other models of the Stellantis Group, which should enable the E-Doblo to cover more than 280 kilometres.

As with the group’s sister models Citroën ë-Berlingo, Peugeot e-Rifter/e-Partner and the Opel Combo-e Cargo (as well as the identically constructed Toyota Proace City Electric), the maximum DC charging power is 100 kW. This means that the battery can be charged to 80 per cent in 30 minutes at the appropriate charging stations. Fiat does not provide any information on the AC charging power in the press release. Depending on the market, a single-phase or three-phase onboard charger is installed in the sister models.

The body of the Doblo is the same as that of its sister models, except for the brand-typical design elements at the front and rear. The short-wheelbase version is 4.40 metres long, while the long-wheelbase version measures 4.75 metres. The latter version comes as a commercial vehicle model with a load volume of 4.4 cubic metres and can load objects up to 3.4 metres long thanks to the “Magic Cargo” function. In addition to the van configuration with large cargo space, the commercial vehicle model is also available as a modular crew cab and as an estate. The payload is up to 800 kilograms in the E-Doblo.

The passenger version offers Isofix mounts on all three rear seats. The towing capacity is 750 kilograms.

The new Fiat Doblo and E-Doblo are built at the Stellantis plant in Vigo, Spain. For Fiat Professional, the Doblo is the second model based on a development of the former PSA part of the Stellantis group: One class above, the double Fiat E-Ulysse and E-Scudo is already on the market.

Orders are now open at all UK Fiat Professional showrooms for the new Doblo and first all-electric iteration, the E-Doblo, which was presented in June. Prices for the E-Doblo start from £27,855 (after PiVG, excluding VAT). The new E-Doblo will release in two lengths, the ‘Panel’ and ‘Crew Cab’, which feature a cargo volume of 3.3m³ and an external length of 4.4m, and 3.9m³ with a length of 4.75m, respectively.

As revealed during the announcement of the vehicle, the technical specifications of the Doblo allow for a range up to 175 miles (or 280 km), courtesy of the van’s 50kWh battery. The E-Doblo also boasts rapid DC charging capabilities as standard, allowing for 80% charge to be reached in 30 minutes.