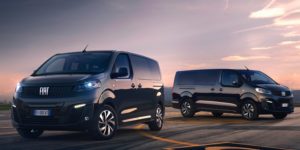 Fiat has unveiled the all-electric E-Ulysse, which can be ordered in Italy, Germany, France and Austria starting this month and goes on sale in May. While the electric drive system is familiar, there is, as usual, a wide range of interior configurations for such models.

The debut of the E-Ulysse is anything but a surprise: Fiat had already announced in October 2021 that it would launch two models based on the well-known Stellantis vans from Peugeot, Citroen and Opel. In December, Fiat had already presented the E-Scudo electric van and opened the order books.

Now the passenger car version follows with the E-Ulysse. The powertrain is the same: The 100 kW e-motor can be combined with a 50 or 75 kWh battery. The latter provides a WLTP range of up to 330 kilometres. The small battery is 80 per cent full in around 30 minutes at a 100 kW DC charging station, while it takes 45 minutes for the 75 kWh battery.

To set the E-Ulysse apart from its technically identical sister models, the marketing emphasizes “the Italian way of hospitality” and aims to position the E-Ulysse as a “living room on four wheels.” “E-Ulysse stands as the paradigm of Italian hospitality as renowned all over the world: the welcome it gives can be seen above all in the configuration of the interior space, analogous to a ‘Living room’, to bring colleagues or clients into,” Fiat writes.

In other passages, the memo reads much more pragmatically. “Together with the modularity of the interior and its capacity to accommodate up to 8 people, these features make it suitable for transportation services for hotels, taxis and VIP transfers,” the company communicates. Up to 12 interior configurations are possible in the 8-seater version and up to 16 variations in the 7-seater.

Like its sister models, the E-Ulysse is built at the Hordain plant in France. Fiat is not yet naming prices for the presentation, but these should be published in the course of the month for the start of ordering.

Just a few days ago, Stellantis announced during the presentation of its financial figures that Fiat will become a purely electric brand from 2027. Until now, Fiat had only known the time window between 2025 and 2030 for this step, while there were already concrete dates for the end of the combustion engine for other Stellantis brands.

Audi to release software and charging updates for the Q4