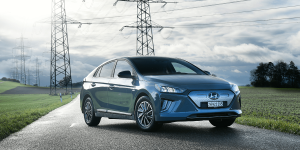 The model was launched in 2016 and since then the electrified sedan has fully met the company’s business expectations, according to the statement: By the end of 2021, 135,692 Ioniqs had been sold in Europe – but Hyundai does not break down sales by the three drive types.

At least the model name will remain: Hyundai had made Ioniq its own subsidiary brand for battery-electric cars based on the new Electric Global Modular Platform (E-GMP) with 800-volt technology in 2020. But there will be no direct successor. “The global discontinuation of Ioniq represents a long-planned decision by Hyundai to meet changing consumer demands in the automotive sector,” Hyundai said.

In addition to its electrified powertrains, the original Ioniq stood out for its efficiency. Among other things, the good aerodynamics (cW value 0.24) contributed to this. However, with the first production model based on the E-GMP, the CUV Ioniq 5, Hyundai has pushed aerodynamics into the background in favour of the angular design. Many observers hope that the E-GMP sedan Ioniq 6 will again have a more aerodynamic body. But then as a fully electric vehicle model, HEV and PHEV will not be built on the basis of the E-GMP.

Ford aims for direct sales model in the USA