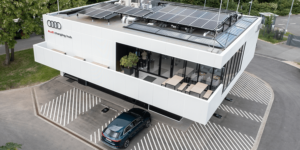 Audi has announced new locations for its fast-charging concept Charging Hub. Based on the findings of the pilot site in Nuremberg, a pilot in Zurich is next on the list. Salzburg and Berlin are slated to become the first regular locations, with more sites to follow in Germany.

In Switzerland, Audi plans to install four covered charge points at two power cubes in Zurich by the end of 2022 – up to 320 kW is possible at each charging point. Six charging points have been installed at the pilot site at the Nuremberg exhibition centre, which opened in December 2021. Audi CEO Markus Duesmann confirmed in March at the annual press conference that Zurich will be the second location, but did not provide any details at that time.

So-called cubes serve as the basis for the Audi Charging Hub. The flexible container cubes can be assembled and disassembled on existing sites in just a few days. The cubes offer two fast-charging points per unit and can be combined in different constellations. In the case of Zurich, this means two power cubes instead of three. Audi says that the smaller footprint is “tailored to suit urban locations and the perfect fit for Zurich’s banking and insurance district”.

Since the Zurich location is probably much closer to the city centre than the Nuremberg hub at the exhibition centre, Audi is foregoing the possible lounge on the second floor – at least there is no mention of a lounge in the announcement. Instead, Audi states that “two 55-inch screens will point out, among other things, the extensive service landscape around the hub” – including numerous food and fitness options as well as an e-bike sharing service in the immediate vicinity.

Also, in the second half of the year, Salzburg and Berlin will become the first regular locations for the further rollout of the Audi Charging Hub, according to Audi. Three more sites in major German cities are to follow in 2023, with additional hubs in German cities planned by mid-2024. To this end, Audi says it is still looking for attractive sites and location partners.

The expansion comes after Audi says it has received “overwhelmingly positive” feedback on its Nuremberg site and points to 60% charging sessions from repeat customers – in other words, those customers who do not have the opportunity to charge at home in an urban environment. From the beginning of January to the end of April, around 3,100 charging processes took place, corresponding to 24 charging processes with around 800 kWh per day. In addition, an average of 35 customers visited the 200-square-meter lounge every day. Not only the hospitality offered was rated positively, but also the convenient charging that can be reserved via the app.

“The numbers and positive customer feedback demonstrate that our concept of offering flexible, premium quick-charging infrastructure in urban spaces was spot on,” says Audi charging hub project manager Ralph Hollmig. Frequent use was also made of additional services such as the exchange station for micromobility batteries and a grocery delivery service.