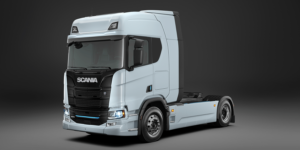 From now on, Scania will be offering customers new electric models every year. Vehicles for inner-city deliveries are now to be joined by battery-electric trucks for regional transport.

The new model range comes with a battery capacity of 624 kWh and is available with R or S cabs. The new trucks, with a gross vehicle weight of up to 64 tonnes, can initially be ordered as 4×2 tractor units or as 6×2*4 chassis from week 28 through local Scania branches. Production is scheduled for the fourth quarter of 2023.

The charging power is up to 375 kW, whereby the manufacturer says that one hour of charging “typically provides an additional range of 270 to 300 km.” Continuous power for a Scania 45 R or S is 410 kW. The ranges vary depending on weight, configuration and route: for example, a 4×2 tractor unit with six batteries is said to be able to cover up to 320 kilometres on a full battery charge at an average speed of 80 km/h.

The Swedish truck-maker Scania is one of the world’s largest truck manufacturers and became a Volkswagen subsidiary in 2015. Since electric trucks sales more than doubled globally between 2020 and 2021, it’s not surprising that the company is aiming to supply this inexorably increasing demand.

“Scania has now reached a favourable maturity regarding our electrified offer,” explains Fredrik Allard, Senior Vice President and Head of Electrification at Scania. “With this major addition to our existing hybrids and the BEVs for urban distribution we introduced in 2020, we can now offer a sustainable and multi-faceted portfolio of zero-emission solutions for our customers.”

Scania announced the launch of BEV and PHEV trucks for urban distribution in November 2020, with sales of the two ranges having started the previous September. The launch was described by Scania CEO Henrik Henriksson as “a prelude to our commitment to long-term electrification”. Even then, new models were announced: “In the coming years, we will launch new electric vehicles every year for the entire product range and are already in the process of aligning our production with this goal.” Henriksson also spoke of one for long-distance transport. Now the company says it is introducing complete BEV-based solutions for regional long-haul.

Although batteries are becoming lighter and more efficient, they still pose a weight problem for heavy-duty long haul vehicles, a sector that hydrogen fuel cells offer greater range with their higher energy density.

In April this year, it was announced that Scania will work with Cummins to build 20 fuel cell trucks  for the Hytrucks consortium. These will be based on Scania’s battery-electric vehicle platform and use fuel cell systems and hydrogen fueling and storage solutions from Cummins. The 20 H2 trucks are to be delivered to HyTrucks in 2024.