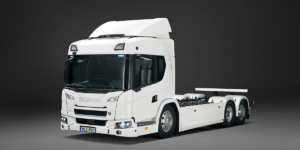 Truck manufacturer Scania says it has reached a milestone in electrification: the first commercial electric truck series from the Swedish VW subsidiary has now been launched on the market. Like the fully electric truck, the plug-in hybrid is also being delivered now and is similarly intended for urban distribution traffic.

Scania started selling the two vehicle models in mid-September. Scania’s BEV truck has an output of 230 kW and is offered with battery capacities of 165 and 300 kWh for ranges of up to 250 km. The PHEV truck can cover 60 kilometres on pure electric power.

Both models are based on the Swedish manufacturer’s modular system and are available with the L and P-series cabs optimised for urban use. A variety of bodies are available, Scania cites a refrigerated box, tipper, concrete mixer and refuse collector as examples, as well as special vehicles for fire and rescue services.

Scania CEO Henrik Henriksson described the launch as “a prelude to our commitment to long-term electrification”. “Over the next few years, we will launch new electric vehicles for the entire product range every year and are already gearing our production towards this goal,” said the Scania CEO.

Daimler also announced in September that their fully-electric truck, the eActros, similarly purposed for distribution transport will go into series production next year. Like Scania, Daimler also has its eye on the long-haul transport challenge and in September announced the development of an H2 fuel cell truck, the GenH2 with series production vaguely scheduled to start in the second half of the decade.

Scania’s CEO  Henriksson seems equally determined to pursue the goal of emission-free long-haul transport saying: “It is of particular importance that in a few years we will also introduce electric trucks for long-haul transport that are designed for quick charging during the mandatory 45-minute rest periods for drivers”.

Henriksson made a similar announcement at the sales launch in September, but then, as now, he did not give a year or an approximate time frame for a long-distance battery-electric model.