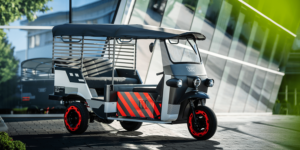 The German-Indian start-up Nunam wants to put three electric rickshaws on India’s roads that are powered by used batteries from Audi e-tron test vehicles. However, the project goes beyond pure technology.

The stated aim of the project is to explore how modules from high-voltage batteries can be reused after their use in cars and become a second-life use case suitable for everyday use from a technical point of view. But the electric rickshaws also pursue other goals: The electric rickshaws are to be made available to women so that they can participate in trade. If the women can transport their goods safely, their chances of earning a living increase.

The vehicles are scheduled to be available from the beginning of 2023. Audi has not yet revealed whether entire battery modules will continue to be used in the rickshaws or whether the modules will still be divided into smaller storage units.

“The old batteries are still extremely powerful,” says Nunam co-founder Prodip Chatterjee. “When used appropriately, second-life batteries can have a huge impact, helping people in challenging life situations earn an income and gain economic independence – everything in a sustainable way.”

According to Chatterjee, electric car batteries are promising for initial use “for vehicles with lower range and power requirements” because of their specifications. “We are using electric car batteries again in electric vehicles in this second-life project, sort of as a lighter form of electric mobility,” says the founder. “This way we want to find out how much power the battery can still provide in this demanding use case.”

Outside China, battery electric vehicle markets are have only been really booming in the last three years. Inside China, EVs have been selling in large quantities for a while, meaning that an enormous number of used electric car batteries are already being put through second life applications before they are recycled. Here, second life is called “cadence” usage, since the further life of an electric car battery is given priority usage to other applications along the lines of “most urgent use first.” This second life cadence includes light electric vehicles – such as electric moped scooters or electric rickshaws – and stationary energy storage applications, for example. The Nunam project is also potentially a pragmatic begin to second life applications which then become big business with an inexorably expanding electric vehicle market. India, as with much of Asia, has a far larger market for electric two- and three-wheeled vehicles than electric cars.

In addition to the rickshaws intended for road use in India, the apprentices at the Neckarsulm site are developing an additional show car rickshaw in cooperation with Nunam, which will be exhibited and used for test drives at the Greentech Festival in Berlin from 22 June. A twelve-strong team of apprentices under the guidance of Timo Engler, Head of Vehicle Technology / Logistics Training at Neckarsulm, is playing a key role in the development. “The trainees and Nunam are in constant communication with each other – we have a dedicated line between Neckarsulm and Bangalore. In building the show rickshaw, our trainees are focusing on range, charging time, and design – the result is a rickshaw with Audi’s DNA,” says Engler.

Nio to start building its own battery packs in 2024