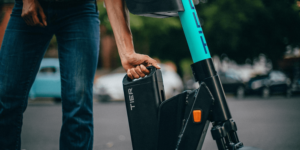 Used battery cells from Tier Mobility’s electric scooters are to have a second life in rural India. For this goal, the Berlin-based micromobility provider has entered into a partnership with the German-Indian startup Nunam.

The two companies are planning to turn used batteries into new energy storage systems, which will then power small devices such as smartphones, fans or lamps.

“We are more than happy to work with Nunam to find a sustainable way to continue using our batteries – even after they have done their job in our electric vehicles for many years,” says Lawrence Leuschner, co-founder and CEO of Tier.

Tier Mobility points out that second-life solutions before recycling are more sustainable than recycling alone. The company explains that batteries retain more than 80 per cent of their capacity even after several hundred charge cycles, which offers the opportunity for reuse. While the batteries’ peak power is no longer sufficient to operate an electric scooter, the individual cells still have the full capacity to hold a charge.

The startup Nunam will extract the cells from used electric scooter batteries and test them for efficiency. Those that pass the test will be recycled. To do this, the battery cells will be re-bundled and integrated into power banks for eventual use in the smaller devices.

Tier says that the goal is to support underprivileged communities in India with recycled and transformed battery cells. Although the Modi government announced that India had reached full electricity access in 2019,  a survey undertaken by Smart Power India, in association with Rockefeller Foundation and the NITI Aayog released in 2020 suggests that 13% of India’s population either use non-grid sources for electricity and lighting or do not use any electricity at all.

The potential market for this kind of off-grid energy storage is enormous since a good portion of the world’s population still doesn’t have access to grids. Even in countries where grid access has long since been established, grids themselves are vulnerable to climate change disasters, which has increased the interest in off-grid energy production and storage.

Nunam has offices in Berlin and Bangalore. The company specialises in lithium-ion battery reuse technology. It has reportedly already deployed and implemented various types of second-life battery systems in India and Germany since its founding in 2017. The company says these batteries have been sourced from a number of different devices, ranging from laptops to electric vehicles.

The partnership with Nunam is Tier’s latest move to expand its commitment to sustainability and the circular economy. In February, the company announced its partnership with battery manufacturer Northvolt, whereby the stated goal of the venture is to improve the sustainability of electric scooter batteries as well as their raw material requirements. In an initial pilot project, 5,000 pet scooters are to be equipped with batteries from Northvolt by the end of this year. The batteries will be used in the new-generation scooters, where the batteries can be swapped out at battery swapping stations.

Just recently, Tier Mobility secured additional capital to drive the expansion of its fleets. The Berlin-based company received $60 million (49 million euros) in loan financing from Goldman Sachs. The prerequisite for the loan was apparently the previous financing round of $250 million in autumn 2020, but the Berlin company’s business development in the Covid 19 crisis and winning tenders in London, Paris and Dubai were apparently also important in convincing Goldman Sachs that Tier Mobility has a sure eye on the future.